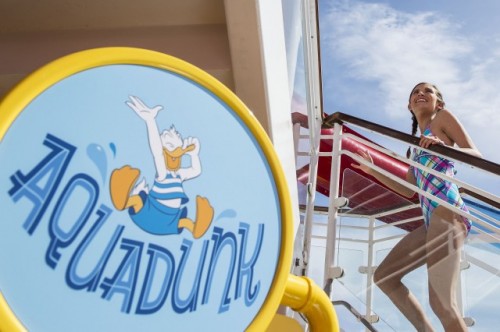 I’m sitting here in the Cove Café on the Disney Magic recovering from the Aquadunk, which is the newly refurbished Magic’s answer the the Aquaduck, the wild water coaster ride on Disney’s newest ships, the Fantasy and the Dream.  Disney just re-launched the Magic after a months-long refurbishment, adding this amazing water slide with a scary twist: The floor droops out and plunges you down the tube. The entire effect is breathtaking, but not so much so that you’ll not want to do it again. It’s a wonderful addition to this ship. 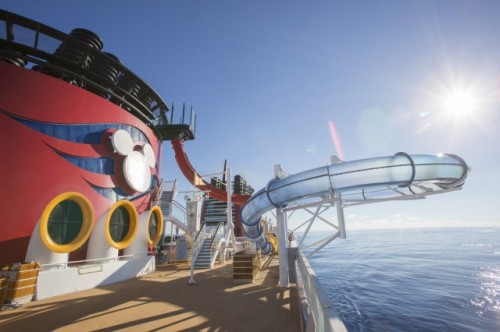 We stayed on shore during our Cozumel day just to ride the Aquadunk as many times as possible, so we didn’t experience any waits, as most guests were exploring off the ship.  If you’re riding on a normal sea day, expect a wait, but it’s worth it.  You’ll go up several flights of stairs to reach the top then you’ll wait at a plexiglass gate. Your tension builds as you watch the guest in front of you walk into the chamber and get into position. When you get in you’ll be asked to cross your legs and fold your arms over your chest and the cast member will cover you with the plexiglass cover.  You’ll be standing up the entire time you’re in the chamber with your back flush with the wall which has water running down so it’s nice and slippery. Next, the cast member waits until he gets the all clear. Okay, this part can be maddening, because sometimes it can take a while for the guest in front of you to get out. Meanwhile, you’re in a plexiblass chamber and you’re STANDING on plexiglass just waiting for the floor to drop.

Have I mentioned that it’s a little bit scary? Because it is.

After the cast member gets the all clear, he’ll give you a thumbs up and you’ll answer back with your own sassy little thumbs up. You’re not scared at all, right? Okay, maybe you’re a bit nervous but there’s almost no time to think about it because at that point, Donald Duck starts counting down and then the floor drops and you’re sent straight down a good fifteen feet before you do an abrupt turn right over the ocean and then with a whoosh, you’re sent into the straightaway and you’re done. 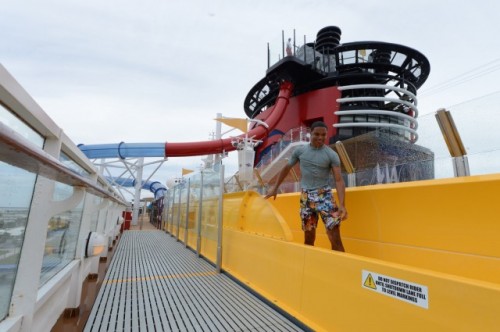 The fun this about this ride is really the anticipation of falling, but once you’ve dropped, you don’t even have time to think about it, it’s so fast.  This is really a brilliant little addition to Disney’s fun shipboard activities and one that you should not miss. As always, if you have any medical conditions that might preclude intense physical activity (however short-lived) you’ll want to skip. Kids under 48 inches are also precluded from using the Aquaduck. But everyone else? Don’t be scared!  Try it out. I promise you’ll love  it.