Once Upon a Time in Wonderland Preview: 1-4 The Serpent 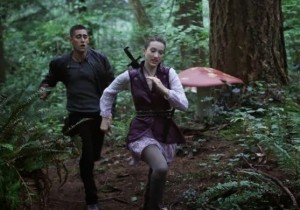 Part of me is frustrated that Once Upon a Time in Wonderland wasn’t on last week. I like the show, and it seems cruel to have it off the air after only three weeks, especially when it is struggling in the ratings. That’s a good way to kill it no matter what. On the other hand, I am also a Peanuts fan, and how can you argue with a classic like It’s the Great Pumpkin, Charlie Brown taking it’s place?

But that’s all in the past now. Let’s look ahead to this week’s episode, shall we?

In Wonderland, Alice is going to make a new friend plus face yet another test of using her wishes when Knave is captured and held for execution. The real reason he’s been grabbed? Jafar is trying to get Alice to use her wishes. And this latest plot might drive a bit of a wedge between Jafar and Red Queen since Red Queen was once in love with Knave.

And on the flashback front, we’ll learn a bit more about Jafar’s back story and what his interest is in Cyrus. I’m curious if there is a particular reason he’s going after this genie or if it is genies in general he’s interested in. But he sure seems obsessed with Cyrus if there are others out there.

The fun kicks off Thursday at 8/7 Central. And I’ll be posting my recap Friday night at Carstairs Considers.