Once Upon a Time 3-5 Preview: Good Form 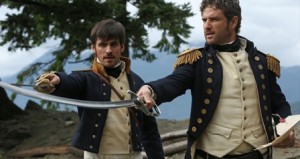 Last week on Once Upon a Time, Neal and Gold almost got Henry away from Pan, but then Pan was able to drive a wedge between father and son and get Neal and Henry away from Gold, which ultimate allowed him to recapture Henry. Meanwhile, he’s also sowed enough seeds of doubt in Henry that Henry is now beginning to feel like an orphan. Meanwhile, Emma confessed that she still loved Neal, whom she thinks is dead, and David continues to grow weaker from the poison in his system.

This week, our flashback centers on Killian Jones in the years before he became the pirate to be known as Captain Hook. In this story, he’ll head off with his brother in search of a plant that will cure any injury.

Somehow, I think that will come into play in the present since Hook and David are going to head off to find a piece of the puzzle they need to get home. No, they aren’t leaving without Henry, but they are trying to come up with some plan so they can escape quickly when they do.

Then there’s the kiss. The previews have teased a kiss between Emma and Hook. The ramifications of that are going to be huge, especially when Neal reenters the picture. I have several friends who are very excited about this development, and they aren’t the only Emma/Hook shippers, I’m sure. Me? I’m more of an Emma/Neal guy.

All this and more (I’m sure) are coming Sunday at 8/7 Central. As always, I’ll be talking about it over at Carstairs Considers once I’ve watched it.