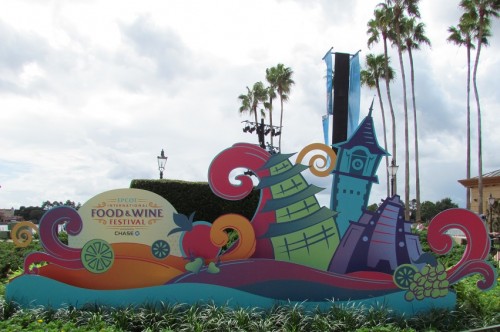 Had some friends in town and my wife and I celebrated our 11th wedding anniversary this week, so we planned a return trip to EPCOT yesterday with the goal to graze around the world sampling some of our old favorites and a few of the new dishes that debuted at this year’s festival. I think it’s safe to say the evening was a success.

All in all I think Disney has done a great job with the festival this year. Many of the old favorites have returned and there are a healthy dose of new dishes to sample this year. They’ve improved the seating around the popular Belgium and Germany booths. The Eat to the Beat concert lineup is also very strong this year.

I’m still not a fan of having so much of the festival take place away from the world showcase in the old Wonder’s of Life pavilion (but I do appreciate the air conditioning there). I also think they’re under utilizing the World Showplace (the big blue tent originally built for the Millennial Celebrations) as it could hold a day long party for all attendees just as well as the few big evening events. I’d love to see food from 60+ countries one day instead of the 25ish we have now. Finally, generally speaking (but not 100% in all cases) the food is much saltier this year than before. After two days of sampling and coming home feeling red in the face with fingers swollen, I’m not happy about all the salt.

Planning your own trip to EPCOT’s International Food & Wine Festival in 2013? While I haven’t sampled all the various dishes (I’m not made of gold), I think I have found a few of the newer selections that really are worth a trip. They are, in no particular order:

Brazil’s Crispy Pork Belly with Black Beans, Onions, Avocado, & Cilantro. Normally I’m not a fan of cilantro, but amount was small and really the black beans more than made up for it. Heck, I would have been happy wit h just a larger portion of black beans, but then there was this delicious pork belly served on top. Yep, I came for the pork belly but stayed for the black beans. 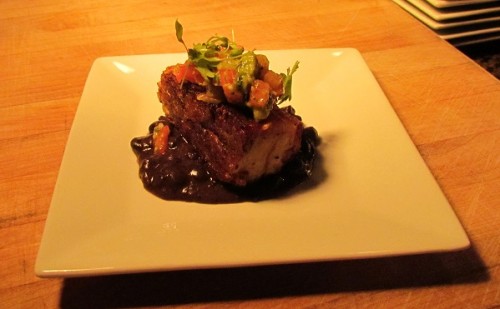 Plating will differ when served at the festival booth

I was not looking forward to trying the Kimchi Hotdog with mustard sauce served at the South Korea booth, but since I was able to sample it at a preview event, I decided, what the heck. I’m glad I did. Chef Jens special ordered the hot dog from the same vendor who provides the custom German sausage at Biergarten restaurant. The dog has extra snap and a little kick of its own. The Kimchi was not too spicy at all and, rather than putting it over the top, the mustard sauce complimented the kimchi perfectly. It’s also one of the more affordable options at the festival. So a win all around. 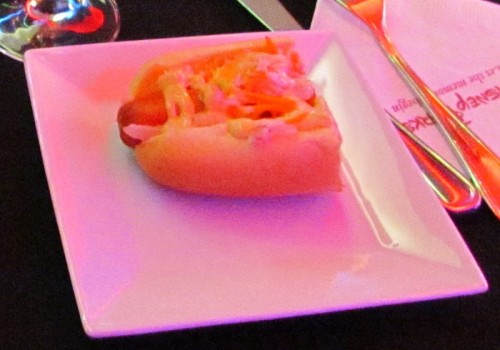 Although I don’t usually associate venison with New Zealand, the Venison Sausage with Pickled Mushrooms, Baby Arugula and Black Currant Reduction sauce was a tasty combination. The sausage was no gamey at all, rather closer to a breakfast sausage, and the portion was a little more than I was expecting. The pickled mushrooms were matched wonderfully with the black currant sauce, however the arugula was nothing special. 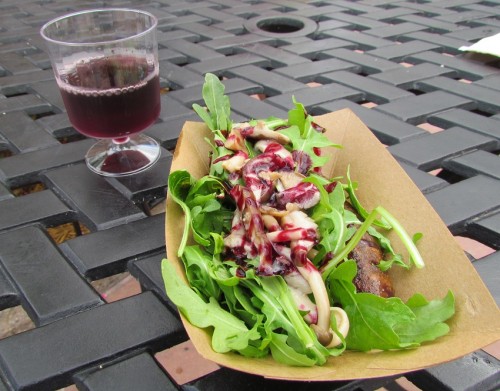 Although those dishes are decidedly meat centric, there is quite a bit for the vegetarian to enjoy. The Vegetarian Haggis at Scotland is much better than the name implies. It’s served with Neeps and Tatties (Rutabaga and Potatoes), while the potatoes weren’t all that exciting, the rutabaga was sweet and paired well with the nut and grain mixture. For those who have had or heard of Haggis, there is no need to worry. I’m not sure why they chose to name it haggis as it bares no relation to the famous olfactory offal sausage. 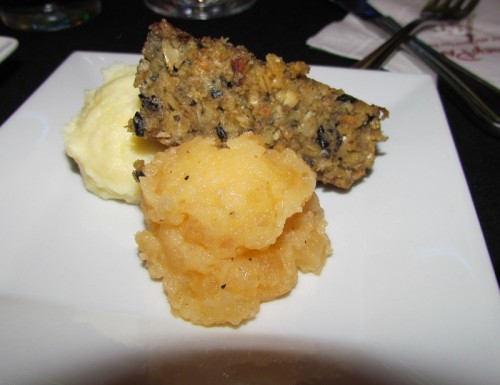 Lastly, the Belgian Waffle options at the Belgium booth were terrific. They have both savory and sweet options, I went with the Berry Compote and was not disappointed. In fact, I would have licked the tray if we weren’t seated with some new friends. The warm chocolate ganache option was heavenly, but I felt the berries had the edge when combined with the waffle. 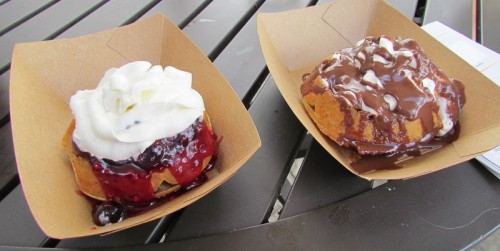 Here’s my general rule for what to order at the Food & Wine Festival. Don’t get anything that you can easily obtain outside of EPCOT. Do that and allow yourself a sense of adventure and you’ll have a great time. Don’t spend a over $5.00 on a dish unless the portion is fair. Hint: $7.50 for three bites of Lobster is not what I would call fair. Add a side dish however, and now we’re talking.

How do you decide what to eat when at the festival?