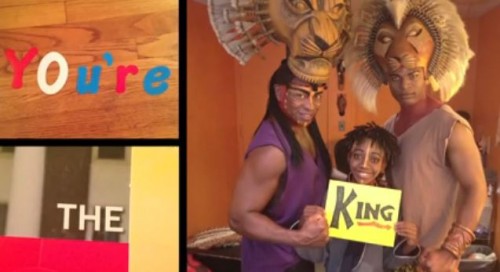 Disney’s Newsies was only supposed to have a 100 day run on Broadway, but it’s now been playing more than 5 times that long. Everyone at the production will tell you could not have done it without the support of their fans. So it’s great to see them turn around the lens and recognize that support with a video that includes fans from around the world (including the cast of The Lion King shown above). I love how they worked the lyrics of King of New York into this tribute too:

Below the jump is another fun video from Newsies Fan Week. A look at the “Oldsies”:

The Oldsies are members of the cast who play the adults in the story. Although the younger set gets most of the fan love, the older actors have developed their own fan base.

It’s time to seize the day! Who is your favorite actor from Newsies?