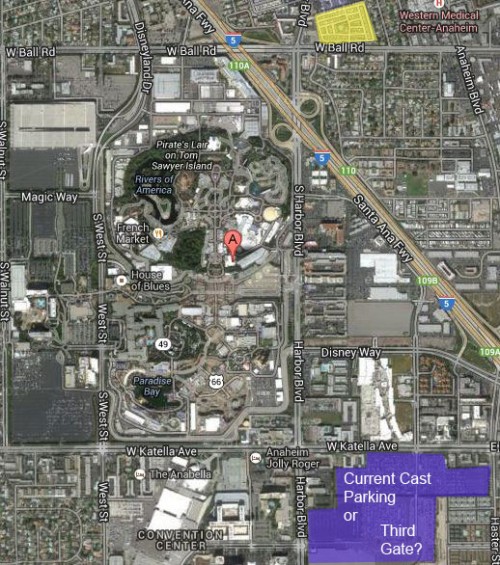 Walt Disney mortgaged nearly everything he owned and sold TV rights to ABC in order to get enough money to build Disneyland. Alas, the money didn’t go far enough to buy up more of the orange groves that surrounded the site in 1954, by the time Walt had more money, he was only able to secure a few more acres. The resulting blight of motels and bars drove Walt to buy an area twice the size of Manhattan in Florida to make sure he wouldn’t encounter that problem again.

Over the years Disneyland has managed to secure a few more parcels, at a price to be sure, and not all of them adjacent to the main property. Some of the plots of land they perhaps should have purchased, slipped through their hands and became the near abandoned Gardenwalk or remain seedy hotels. Those that they have been able to secure, have become parking lots to give the extra cast members required to a resort with two theme parks somewhere to stow their cars during their shift.

Although we haven’t heard much in terms of new purchases over the last few years, this week Disneyland filed papers to convert a former RV Resort on the North-East corner of Harbor Blvd and Ball Rd into a cast member parking lot. The 11-acre property should hold an additional 1,400 parking spaces. As you can see its a lot closer to the resort than the other cast member parking lots. Whomever Team Disney decides gets the spots will have a much shorter commute to work once they’ve parked. I’m sure they’ve be coveted.

Disneyland spokesperson Suzi Brown said, “Our successful expansion of Disney California Adventure has resulted in a record number of guests visiting Anaheim and 5,000 new cast members. Acquiring this parcel will help us to accommodate additional guest and cast parking needs.”

Disneyland has even resorted to parking cast members as far away as the Anaheim Stadium and busing them to the resort. In busy traffic that can take over 20 minutes, or longer if there’s a real backup. Not good when you need to be at your attraction post by a certain time.

I’m sure a few hopes will be raised, but fans should not take this as a signal that the ‘strawberry fields’ will finally be developed into a third gate (whether water park or boutique park). It might happen some day, but it’s very unlikely in the near term. And when that happens it will require a lot more than a 1,400 more spots. It will probably involve the construction of at least one more parking garage and a new transportation system for the resort.

To me it sounds like the RV resort owner finally decided to sell and Disney was able to make an offer they couldn’t refuse. That’s good news for cast members, and by extension guests. Any one else in the area looking to sell? I’m sure Disney will have an open ear, if not wallet.

(story via OC Register, but subscription required so I won’t give them a link here)