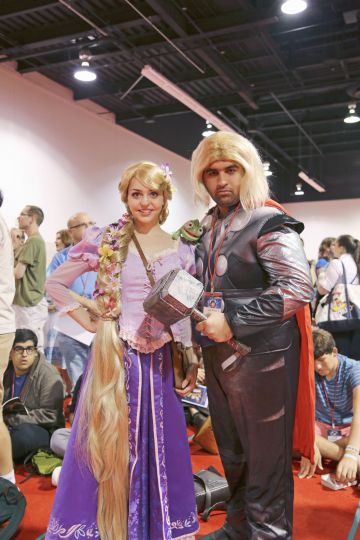 Do you know Traci Hines or Cassie Wanda. They’re both Disney cosplay fans who have built up a name for themselves via their amazing costumes, photos, and videos. Both are profiled as part of a Buzzfeed story on Disney Fans who made the journey to D23 Expo to show off some of their dedication to the magic along size 40,000 of their closest friends.

Fandom is hardly an obscure phenomenon, now that the Whedonites, Trekkies, Cumberbitches, and a zillion other subgroups have broken out into the mainstream consciousness. But Disney fans have largely gone ignored, even though the company may have the largest sect of hardcore adherents within its sizeable ranks of casual admirers. Other fandoms celebrate specific artists or franchises; Disney, on the other hand, has created an entire world to celebrate. Their fans are not loyal to just one actor or TV series, but an entire behemoth of a corporation.

If you’re reading The Disney Blog right now, chances are the above quote applies to you. :)

On the other end of the spectrum are the grumbling, get-off-my-lawn obsessives that are called Frothers or Foamers (as in frothing from the mouth) because they criticize everything Disney does for not being as good or respectful of its glory days. The time period the company is failing to honor, of course, depend on the era in which a fan grew up. No new ride or park exhibit or cartoon can compare to the old classics, even if they were just big, dolled up versions of herky-jerky country fair attractions.

That might be a bit of exaggeration. But I do think a later comparison to Disney-worship as a form of religion is accurate.

All in all, I thought it was a pretty balanced story. It was nice to read something that doesn’t attack fans for their fandom as many of these profiles pieces tend to do. Read the whole thing, along with some great pictures from D23 Expo, at Buzzfeed.

Do you feel enough attention is paid to Disney’s true fans? Or is any attention too much?