If you twist my arm and force me to pick my favorite restaurant at Walt Disney World, I’ll probably say the iconic California Grill. It has certainly hosted many of my favorite meals over the years and a number of special occaisions. So when it went down for a major rehab, I was a bit worried that it would lose the charm and flavors that attract me to it. As you can see form the concept art above, the new design is inspired by mid-century modern California which does fit the theme, and my talks with the chefs of the restaurant have set my mind at ease about any changes to the menu as well.

The restaurant will reopen in early September with the same sweeping views of the Magic Kingdom, only with improved glass that will eliminate the annoying sunset effect every night. The menu will see a few old favorites returning and many new dishes including baked local prawns with charred lemon and wild Columbia River salmon with Zellwood sweet corn pudding. 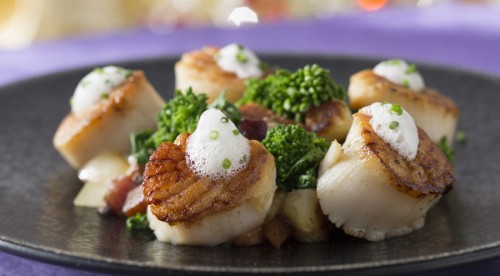 Sushi is showcased with a new, multi-course omakase menu featuring pristine seafood. The wine list expands with about 250 wines on the list, 80 by the glass. There also are 10 varieties of sake, eight kinds of craft beers and ciders, and signature cocktails created just for California Grill.

In addition Disney has added little touches like a carpet design inspired by the sketches of artist and Disney Legend Mary Blair (reproductions of her artwork are on display too) and a new swine display, a work of art housing 1,600 bottles. Two new communal tables for 10 are expected to be prime seating, positioned at the north end of the dining room for optimal fireworks viewing. If you prefer to watch your fireworks outdoors there are now two areas – one on the northwest side, another new deck on the southwest side.

previousDisney Infinity is Now Available, Here’s What you Need
nextFirst Poster of The Fifth Estate, Distributed by Disney for Dreamworks