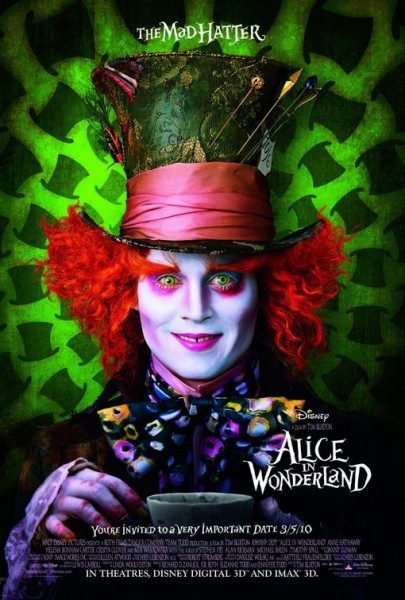 I was on vacation earlier this month and missed the news that Johnny Depp has signed on to return as the Mad Hatter in the Alice in Wonderland Sequel. That the sequel would be made was in little doubt after the original brought in more than a Billion dollars at the worldwide box office after costing just $200 million to produce.

“The Long Ranger”, Disney’s last blockbuster starring Depp, has not fared so well. It’s earned barely $150 million world wide after costing northward of $225 million. This means Disney will probably want to keep a close eye on the budget for Alice 2, so as not to risk as much. Of course, they may find something else to hang the failure of The Lone Ranger on other than Depp’s waning star-power. Plus they’ve already signed him to reprise Captain Jack Sparrow in the 5th Pirates of the Caribbean film, so there will be no talk about that in the halls of the mouse house, you clear?

The other interesting news is that Tim Burton won’t be returning as Director. Instead we’ll see “The Muppets” director James Bobin. I thought The Muppets was pretty bad, so I don’t see this as a step in the right direction for this franchise, but I’m willing to be surprised.

previousHow Fast Passes Are Ruining Our Nation, Hyperbole… or Not?
nextDisney’s Animal Kingdom Welcomes Its First Ever Masai Giraffe Birth