How Fast Passes Are Ruining Our Nation, Hyperbole… or Not? Megan McArdle, a business and economics blogger recently made the jump from Newsweek to Bloomberg. During that time off she indulged in one of her passions – roller coasters. I knew there was a reason I liked her. One of her insights from the trip is about how guest services like Quick Queue, Fast Lane, or Fast Pass are impacting the enjoyment of theme park guests, and, perhaps, even symbolize something that’s gone wrong with our nation over all.

McArdle observes something many theme park fans have noticed before. Even though Fastpass is free, and other systems aren’t that outrageous as a percentage of the overall vacation, some families just don’t use them.

I find it hard to believe that the problem is a lack of awareness; all three parks prominently hawked Quick Queue or Fast Lane passes at concession stands.

Perhaps the problem is the price — though with the bucks people were dropping on concessions, I can’t believe that this is the issue. No, I think the answer is in the hard stares we got as we walked through the fast-pass gate. People just don’t like fast passes. It doesn’t feel right.

I had never really thought about it that way. But it makes sense to me.

The real problem with fast passes isn’t that they allow a tiny number of people to jump the queue; it’s that those people start feeling that they should never have to mingle with the people who don’t have the passes. They act like entitled jerks who have the right to shove everyone else out of the way.

We’ve all encountered people like that, haven’t we. In fact as the gap between the rich and poor continues to expand, the whole idea of a separate access for the privileged is spreading:

Jump the security queue at the airport because you’re a frequent flyer. Walk straight into your rental car because you’re a Hertz#1 Club Gold member. Don’t like the kids your children are hanging around with? Push them into an elite program, or buy a house in a more exclusive school district. Join a gated community so the wrong people can’t even walk near you.

The economic elite used to just buy more of the things we all enjoyed. Now they have access to a different set of experiences entirely. No, that’s not quite true — of course the rich used to be able to afford better vacations and nicer cars. But increasingly they’re enjoying an exclusive version of the things we all do — right there in front of us, where we can resent them for it.

Frankly, that’s been one of my chief arguments against Fastpass access in that it creates separate cast of guests at the parks. Disney is not the worst offender, as at least Disney’s Fastpass is included in general admission with the same rules for everyone.

After reading McArdle’s post, I’ve even come to a new appreciation of Disney’s FastPass+, at least as the current rumors lay it out (this may change if rules are different when it debuts). 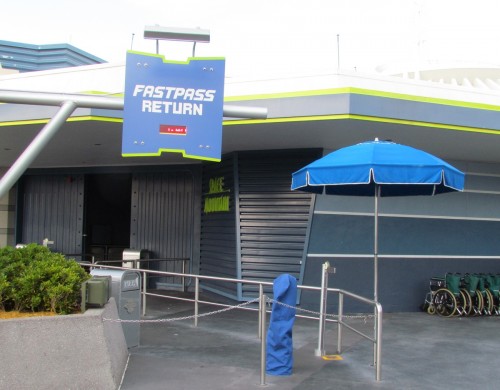 Right now it sounds like all guests would be allotted 3 (maybe 4) Fastpass+ reservations in one park per day. You can log on and request your favorite Disney attractions 60 days in advance, perhaps a bit earlier for Disney resort guests, your preferred times (if you won’t be there in the AM, you can set your times to start at Noon for instance) and the computer spits out your Fastpass+ return times. You can modify them anytime up to when the Fastpass+ is active.

Fastpass+ will not only replace the existing system of paper tickets, but will vastly expand the number of attractions with Fastpass access. (Such as a Parade viewing location, a special meet and greet with a princess, or special seats at a show) As these new attractions were previously not in the loop, there is some complicated math to see just how overall park capacity will be affected by Fastpass+. But that’s a topic for a future post as Disney is still working out all the kinks.

Aside from the part of having to make early reservations not really an option for locals or those who decide to visit spur of the moment and other logistical issues for groups, this new system is significantly more equal than say Universal’s system where you need to pay extra or be a hotel guest to get the QuickQueue access (I’ve used it, and the experience is exactly like McArdle describes).

I hope that Disney figures out the math so that even with more people using Fastpass in the parks each day, the overall number of Fastpasses issued for an attraction is reduced. This would have the very nice effect of letting the people who really want to make sure they experience Peter Pan get to do so, while speeding up the wait for those who are forced into the Standby Queue.

I’m still with-holding final judgement, but I do find myself liking the idea a bit more. I’m definitely not a fan of the type of pay for front of the line access that McArdle experience because it really does reflect the growing economic inequality in our nation and, in my book, it’s just poor form.

What are your thoughts on McArdle’s column and the potential for Fastpass+ to be a better system than pay-for-access systems?