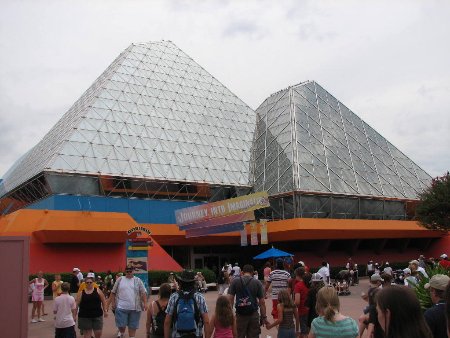 I came across this rumor recently (thanks to “The Epcot Explorer’s Encyclopedia” Facebook page) regarding the glass pyramids of Future World. Supposedly, the entire Imagination pavilion will close on Jan. 2nd 2014.

The rumor states that Captain EO will close for good, but the store and ride would be closed for 1 year for extensive renovations.

I read this and went…WHAT?! DAK is getting Avatar, MK received New Fantasyland and DHS is rumored to be getting either Cars Land, Star Wars land or both; Now Epcot is stepping up to the plate for a redo of some of its existing attractions, if this rumor turns out to be true.

The biggest thing that peaks my interest is the complete shutting down of the theater. Would this be made into a store so the current location can become track? Will the rumored Dr. Doofenshmirtz/Phineas and Ferb concept be put into this building? Will Figment even remain on the ride? Will the second floor actually be utilized again? So many possibilities can come from this.

When this could possibly be announced, if true, is also up in the air as Disney Parks and Resorts has pretty much told everyone to expect NO announcements at the Expo this year, just history.

What do you think about this rumor? What would you like to see done in this location? If the upside waterfall is removed, will you be as ticked as me? Let me know in the comments below. Until next time…Have a Magical Day!