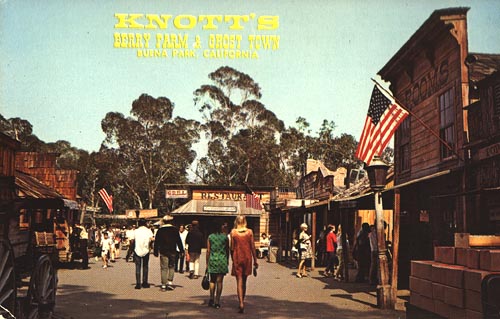 In my youth, I heard a lot of weird stories about Disneyland. For instance, I was told that the facades for the buildings on Main Street were salvaged from actual old buildings and brought to Anaheim by Walt to give it that authentic look and feel. Not true, as it turns out. However, another Walt, Walter Knotts, did import a few buildings for his growing roadside attraction developed to support his fruit stand and restaurant just a few miles away – Knott’s Berry Farm.

There are my favorite stories about the Matterhorn tipping into the Submarine lagoon if all the water was drained, it did not. I also heard that the Matterhorn was the height it was, 147 feet, to avoid having to install a blinking red warning light for planes. In reality, it was no where close, but Anaheim did have to provide an exemption as no zoning rules permitted a building that tall. The ‘basketball court’ was not added to get around zoning rules, but just as a place for the climbers to relax.

Of course, there are some great stories that turned out to be true after all. That a family once spread their son’s ashes inside the Haunted Mansion only to have it all removed during the next refurbishment. There was a poor cast member who lost her life just nine days after the opening of America Sings. She was sitting between the stage and the wall of the moving auditorium and was crushed between the two. A number of guests had taken their lives into their own hands and lost over the years. The drop on the Matterhorn roller coaster that faced the Lagoon will forever been known as Dolly Drop after the woman who chose to stand up in the car and lost her life when she was thrown from the vehicle. (Editor: In retrospect, those are all pretty morbid details, there are plenty of lighter ones too, just those sprang to mind when I was writing the draft of this article.)

There have been many books written through the years full of strange stories like these, some of them better researched than others. Two to start with are Mouse Tales: A Behind-The-Ears Look at Disneyland

from David Koenig and 101 Things You Never Knew About Disneyland: An Unauthorized Look At The Little Touches And Inside Jokes

by Kevin Yee and Jason Schultz.

What strange stories of Disneyland did you hear that turned out to not be true?