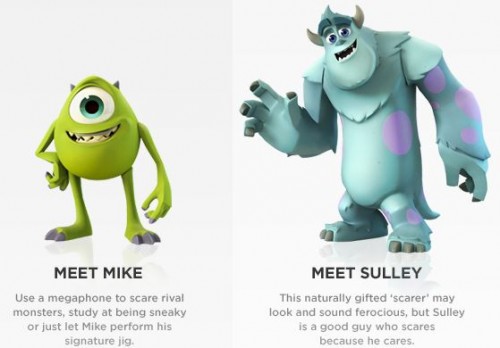 It’s not even released yet and Disney Infinity is already expanding the movie roster to include two of this summers big films, Monsters University and The Lone Ranger. Similar to Activision’s Skylanders game, Disney Infinity will contain stand alone games based off each new movie universe and feature unique avatar figurines you can swap out while playing the game.

“A great example of expanding these movie worlds is Monsters University and what’s going on with Fear Tech, which is the rival university that we’re exploring in this game,” said John Pleasants, co-president of Disney Interactive. “There’s a whole story line there that is not part of the Monsters University movie. It’s additive, not just drafting off of the movie.”

Another key differentiator for Disney Infinity is that it allows Monsters U characters like Mike, Sulley and Randy to interact with other film characters like Wreck-It Ralph, The Lone Ranger, Captain Jack Sparrow and Buzz Lightyear within the Toy Box mode. Each play set also has gadgets like Monster U’s Give Em A Hand Launcher, Mike’s Bike, Phone It In Launcher and a Toilet Paper Launcher that can be used in Toy Box. The way Disney is connecting these worlds is by viewing the physical toys you can collect as real toys within the virtual worlds, so it’s the toys that are interacting in these worlds, not the “real” movie characters.

Disney Infinity will give the mouse house one more way to capitalize on its successful movie franchises. Will you be adding it to your families gaming repertoire?

previousTV Binge Watching: America’s Newest Pastime
nextDisney Partners with Cars.com to Give away Free Tickets to The Lone Ranger