Behind the Tiki Bar at Disneyland’s Enchanted Tiki Room 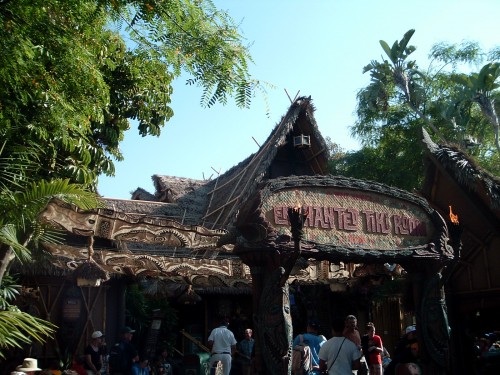 Although Walt Disney’s Enchanted Tiki Room was originally sponsored by United Airlines, in 1973 the sponsorship was taken over by Dole. This brought the addition of Dole Pineapple flavored treats to the little bar in front of the attraction. So, as the Tiki Room celebrates its 50th anniversary, it’s time to take a look at the Tiki Bar and its main treat the Dole Whip.

Disneyland has provided a video below that features cast member Jennifer Pitoniak who, for the last 10 years, has been serving up delicious Dole Whips at the Tiki Juice Bar. The popular, sweet treat is fat-free, gluten-free, dairy-free and the portion clocks in at around 100 calories. Last year, Jenn helped the Tiki Juice Bar serve up 650,000 Dole Whips and Dole Whip Floats

Although I can’t make it to Disneyland for a Dole Whip from the Tiki Juice Bar, I will make a point to pick one up from the Magic Kingdom this weekend. I definitely dig that aloha shirt too. Wish they sold those, how about you? How will you observe the 50th Anniversary of the Tiki Room?