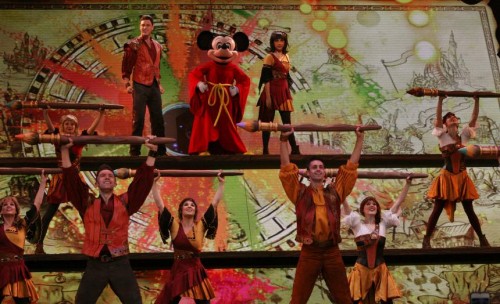 Disneyland’s newest stage show, “Mickey and the Magical Map” features several great songs from classic Disney animated films, and it introduces a completely original song for the show, “Journey to Imagination.” In this new video Adam Watts and Andy Dodd, two thirds of the award winning Red Decibel studio, share a little of what it was like to create a theme song for the show:

Red Decibel is a well known award winning composition studio with credits that include, Kelly Clarkson, Joe Walsh, Plain White Ts, Jesse McCartney, Demi Lovato, Miley Cyrus, and The Jonas Brothers, plus film projects such as The Chronicles Of Narnia: Prince Caspian and Pixar’s Brave to name a few.