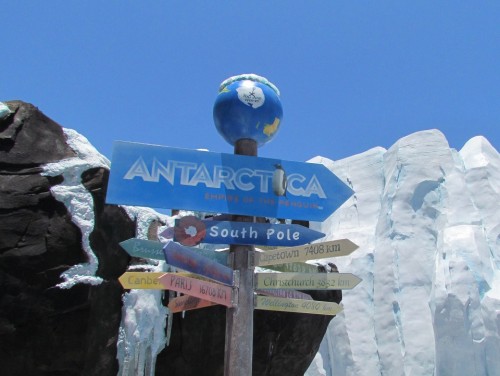 While SeaWorld is in competition with the other local parks, they’ve taken a different angle to their themed design. Unlike Belle’s Village in New Fantasyland or Wizarding World of Harry Potter at Islands of Adventure, SeaWorld is not trying to put you ‘in the movie’, just ‘in the mood.’ The mood being set by tons of hand carved ‘ice’, various south pole elements, and some fun penguin representations. There’s no story being told, but you do feel like you’re in a wondrous place representative of Antarctica. 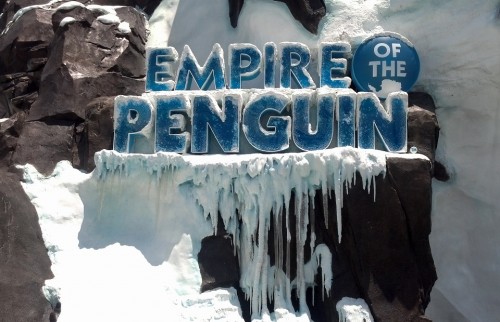 I did not get to see the setting at night, but I’m told parts of the ice illuminate with a blue glow adding an extra dimension of beauty. The central focus, and entrance to Antarctica: Empire of the Penguins, is a representation of a penguin mother and child out of ‘stone.’ Unfortunately, it’s hard to get a picture without a wide angle lens due to the narrow walk-way there.

You enter Empire of the Penguin attraction through a unique system of different staging areas. It’s designed to take guests out of the normal patterns of theme park and its successful to some extent. You still have the pre-show, queue, and loading elements like you see on many similar attractions, but the loading process for the new ride vehicles is unlike other attractions and very guest friendly.

From the loading zone, you enter the ride portion of the attraction. I don’t want to give away too many spoilers, but you are following the main character of Puck, who you see hatch earlier in the pre-show, as he goes through life. Your vehicle scoots, twirls, and jockeys around like its on ice and then a the ‘something goes wrong’ portion of the ride, it also moves around violently for a bit. But nothing all members of the family can’t enjoy. Don’t like twirling at all? Ask for the gentle version, there are four cars in the attraction and at least one of them will be a non-spinning variety.

The attraction varies in length and path based on which of the 32 random sequences you get. If you have the shortest sequence, which I apparently got, you’re in and out of the attraction in a blink, if you have one of the longer sequences, then you’ll be getting some great quality time with the attraction. It’s sort of a gamble, which can be frustrating after waiting in a long queue.

To be completely honest, I’m of two minds when it comes to evaluating the attraction. It had relatively modest goals and it exceeded them or it claimed to be a game changer for SeaWorld and potentially Central Florida and fell flat.

On one hand, the goal was to build a ride that the whole family can experience together. They took a trackless ride system that allows some movements uniquely suited to an ‘on the ice’ adventure. There’s a lot of slipping and swirling. They then put that into a load system that’s completely unlike the typical theme park queue experience. On top of that, there is a simple story with a cute central mascot. You’re then provided one of the best finales in any attraction, a chance to be up close and personal with real penguins.

On the other hand, the attraction is not the game-changer we were told it would be. The capacity is too low and the design and story elements too simple. For many, the ride itself will just be an unwelcome barrier between them and some quality time with the little tuxedo wearing birds.

One of the many complaints I heard was that we’re told we’ll get the story from Puck’s perspective. But really, they missed the chance to tell the story of Puck. Instead, like on Turtle Trek, you experience a series of adventures in the life of Puck. A series of disjointed adventures is not the same thing as a story. That Turtle Trek and Empire of the Penguin are so similar in the story they tell, seems odd to me.

While some of the attraction does a good job removing barriers between guests and their enjoyment of the penguins, there remain major elements that erect that barrier in other ways. First off, you can’t see the Penguins without waiting in the queue. Second, because the barriers between you and the penguins are removed in the last room, you’re exposed to 30 degree temperatures. That might seem refreshing after a long day in the sun, but for a kid who just got drenched on the adjacent Atlantis, it’s going to be miserable. Of course, SeaWorld is counting on this to keep the crowds moving through the chilled room.

This may annoy guests who want more time up close with the feathered waterfowl, but SeaWorld’s concession is a post-show gallery room. There you can stand and watch penguins swim through a 20 foot deep pool of water that connects back through the whole area. I get the feeling that the design of Empire of the Penguins was a series of compromises instead of a real attempt at making something amazing. 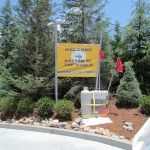 More trees in Antarctica than I realized 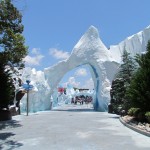 The main entrance to Antarctica is through that arch of ice 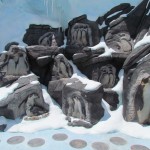 Beautiful sculptures of all the Penguin species in the world 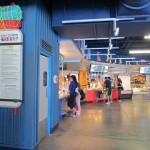 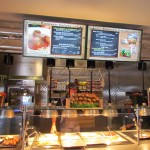 One of the three stations 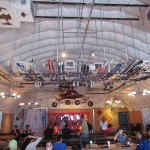 Indoor and Outdoor seating is available. 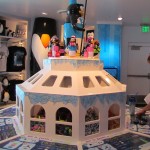 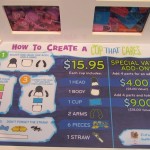 In the end, the new land of Antarctica will be seen as a giant step up for SeaWorld, but the entire project itself has so many little bits and pieces that weren’t well conceived or fail in execution. If you can look past that, you’ll still have a great time in Antarctica. But if attention to detail is what completes the experience for you, you might leave a little disappointed.