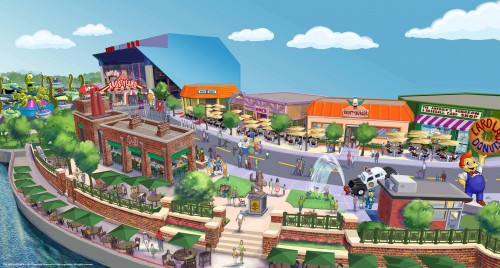 The Simpsons has been a staple of television animation for over 20 years. There was an profitable animated feature and a second in the works. Since 2008 there’s even been a theme park attraction that takes guests to Krustyland at Universal Studios Hollywood and Orlando. But in the famous words of online pitchmen, but wait there’s more. Universal Studios Florida has decided to import much of the city of Springfield to Central Florida.

Of course, the concept art has that familiar Groenig style of animation. It it we can see many familiar buildings, food and places pulled right from the show, a Duff Beer factory brewed exclusively for the park, and even a new attraction. Everything is scheduled to open this summer.

For the first time ever – anywhere – fans will be able to walk down Fast Food Boulevard and visit the places that helped Springfield stake its claim as “Shelbyville by the Sea.” They will be able to grab a Krusty-certified meat sandwich at Krusty Burger, snatch the catch of the day at the Frying Dutchman, get a slice at Luigi’s Pizza, go nuts for donuts at Lard Lad, enjoy a “Taco Fresho” with Bumblebee Man and imbibe at Moe’s Tavern.

The new attraction – called Kang & Kodos’ Twirl ‘n’ Hurl – will take “foolish humans” on an intergalactic spin designed to send them into orbit.

“This will be a must-see experience for Simpsons fans all over the world,” said Mark Woodbury, President of Universal Creative. “For the first time ever, they’re going to be able to enter a world that they’ve only seen on television – and we’re really excited to bring that world to life.”

“This new expansion will broaden and deepen the already incredible experience at Universal, by bringing to life the iconic landmarks of Springfield that fans have grown to love,” said Jeffrey Godsick, President, Fox Consumer Products. “Fans will literally be able to live and breathe Springfield as they visit the statue of Jebediah, enjoy a Krusty Burger, and have a seat at Moe’s Tavern, which are just a few of the great experiences awaiting at Universal.”

“It has been an honor to bring the world of the Simpsons to life in such a letter-perfect way,” said Denise Sirkot, President, Worldwide Brand, Gracie Films. “Truly this is the Krustyest place on earth.”

This is yet another notch in the belt of Universal Orlando which has been throwing out pitch after pitch of major league theme park attractions hoping to get a larger portion of each tourist’s vacation budget as they visit Central Florida. There are over 50 million visitors to Central Florida every year, so there is a lot to go around, but if Universal continues to produce terrific new attractions year after year with no answer from Disney, I have to believe there will eventually be an impact on Disney’s bottom line.