Universal Orlando Resort made official its worst kept secret today. The Hogwarts School of Wizarding Magic & Hogsmeade themed Wizarding World of Harry Potter land in Islands of Adventure will joined by a Diagon Alley companion land in Universal Studios Florida. Connecting the two lands will be the Hogwarts Express which will travel from King’s Cross station in London to Hogsmeade.

Although construction on the new area started around a year ago, it has been progressing swiftly, to the point where it has been clearly visible to park visitors for months (leading to lots of questions that employees have had to deflect) allowing an opening date sometime in 2014. When the area is complete it will feature iconic Diagon Alley shops, an immersive themed restaurant, and an innovative new attraction based on Gringotts bank.

“For Harry Potter fans, this is an opportunity to go to multiple places that are iconic places within the story,” said Mark Woodbury, President Universal Creative for Universal Parks and Resorts. “And people that were really not big fans of the franchise came to the Wizarding World of Harry Potter and were immersed in the environment and really thought it was marvelous. We have the same expectation to take them on additional journeys.” 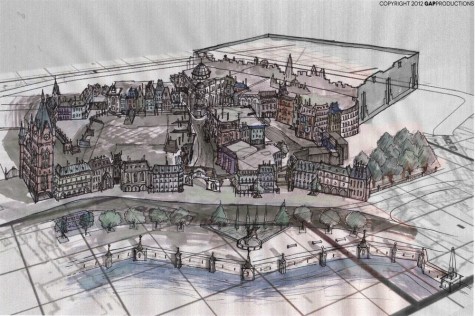 “I’m so pleased that The Wizarding World of Harry Potter has proved so popular to date, and I’m sure that the attention to detail in creating the new Diagon Alley area will make this an even better experience,” stated author J.K. Rowling.

“We are continuing the journey and adding an entirely new level of adventure,” said Tom Williams, Chairman of Universal Parks & Resorts.  “And we are bringing the same drive, commitment, enthusiasm and innovation to this project as we did to the first.”

Since the original Wizarding World of Harry Potter opened in June of 2010, Universal Orlando has been experiencing record attendance in both its parks. It sounds like the attention to detail famously demanded by Rowling and executed by the combined efforts of Universal and the movie production team at Warner Brothers will also be found in the new land. Universal clearly intends to carve out a larger slice of the Orlando tourism market. Mickey has better be careful, or the boy wizard will steal his cheese.