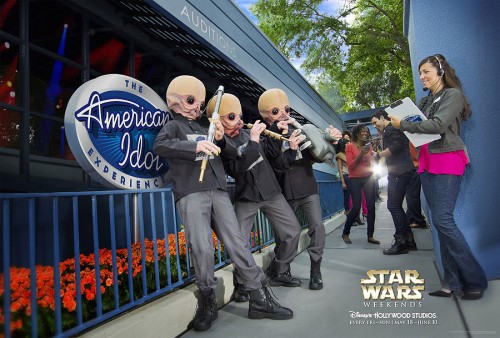 Star Wars fans will get an early dose of galactic fun as Disney’s Hollywood Studios hosts Limited Time Magic for the annual, fan-proclaimed “Star Wars Day,” May 4 – a date that Star Wars fans worldwide turn into a celebratory pun, “May the Fourth Be With You!” This one-day-only celebration will feature special Star Wars entertainment, shows, characters, exclusive merchandise, a Star Wars dance party and a Star Wars-themed fireworks show to cap off the day. Also be on the lookout for “Revenge of the Sith” merchandise.

There will also be a special edition of Jedi Training Academy, where parents join their children for the training and finale with villains from the Galactic Empire. Be sure to get there early if you want to partake as I’m sure the slots will fill up right after rope drop.

Star Wars Weekends are still scheduled in all their hoopla for every Friday, Saturday and Sunday from May 17-June 9, 2013.

previousFestival of Fantasy Parade Announced for Magic Kingdom
nextOnce Upon a Time 2-20: The Evil Queen