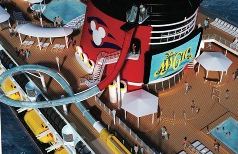 The Disney Magic first magical cruise was in 1998 making it the oldest ship in the Disney Cruise Line fleet. That’s not to say it’s showing its age. Disney has been good about keeping the ships in top shape by performing occasional dry dock maintenance work and now the Magic is scheduled for its next extended rehab. Only this one will be a a bit different as DCL looks to add some of the more successful elements of the new Dream class ships to their smaller brethren.

Among the rumored additions is a Marvel themed play area for kids, a new Three Caballeros themed restaurant, an AquaDuck slide that goes out over the water (concept art above), and more. The full details are expected to be announced at a press event scheduled later this weekCheck out the Disney Cruise Line Blog for some more of the leaked details.