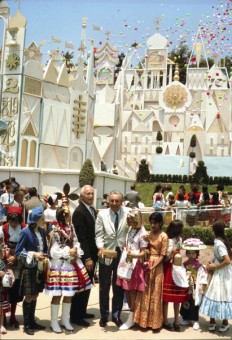 WALT’S SMALL WORLD — Sunday, May 28, 2006, marks the 40th anniversary of the opening of the classic ‘itÕs a small world’ at Disneyland in California.Ê For it’s opening, Walt Disney, together with children representing the world’s nations, poured water collected from the major rivers, seas and oceans of the globe into the Seven Seaways canal that carries visitors in boats through the attraction.Ê One of the most popular Disney attractions of all time, the show is a fun-filled and whimsical salute to the children of the world that conveys its message of peace and harmony through the international language of music. ©2006 Disney Enterprises

previousit’s a small world after all