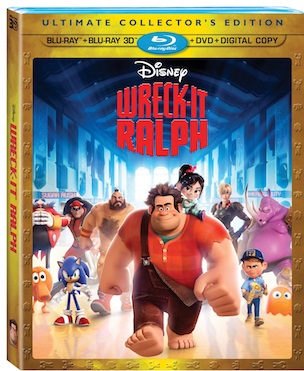 It’s been a few weeks since Wreck-it Ralph hit the shelves and if you haven’t already added it to your collection, what are you waiting for? Walt Disney Animation Studios’ latest hit shows that it still has the ability to craft great stories and to provide the artistic ability required to tell them. That’s a unique combination you won’t find in too many other places in the animation universe.

Plus while Wreck-it Ralph is a love letter to the gaming industry, it’s also thoroughly understandable by someone with even just a passing interest in video games. This is the attention for detail that old Disney classics were famous for.

I won’t go into the plot details of the move as you can read that in my review here.

The bonus materials for include:

Paperman is pretty amazing and the Intermission thing is cool, but my favorite are always the alternate and deleted scenes. Definitely would have been a different movie had these been in there.

Your purchase of Wreck-it Ralph (or anything else via this Amazon link) helps support The Disney Blog. Thank you.