You know how some days you’re feeling a bit down and then a story comes along and picks you up. Well today I learned the story of a nine-year-old inspired by the Disney/Pixar movie “Brave” to go bald for childhood cancer research! When a child is this brave, it kinda of puts your daily issues in perspective.

As soon as Sadie Madden, a nine-year-old girl from Lagrange, IL, saw “Brave” she wanted to grow her curly, red hair as long as Merida’s. Her plans changed once she heard about the St. Baldrick’s Foundation, a nonprofit organization dedicated to raising money to fund the most promising research to find cures for childhood cancers and give survivors long and healthy lives. Sadie decided instead of looking like her hero, she was going to be brave like Merida and get bald at a St. Baldrick’s signature head-shaving event on March 14.

Cancer research is very important to Sadie because her grandmother died of breast cancer when she was five, and she still really misses her. Sadie shared that she is proud to go boldly bald for kids with cancer and is ready to have her hair be GONE DADDY GONE!

Her mom originally posted about Sadie on Facebook and from there the story was shared by friends of friends of friends and has spread so quickly that people who don’t even know Sadie have been making donations. Sadie is extremely thankful to everyone who helps her reach her goal and sends a personal thank you note to each of her supporters.

Sadie’s original goal was to raise $500, but after receiving so much support on her fundraising site, she passed her goal of $7,500 and raised more than $10,000.

And, as she promised, here’s a photo of Sadie Madden with her head shaved BALD! 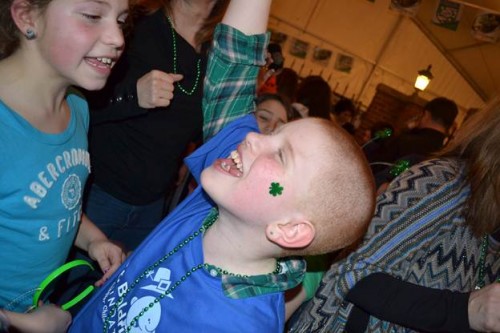 You can still support Sadie and the St. Baldrick’s Foundation as they attempt to eradicate childhood cancer.