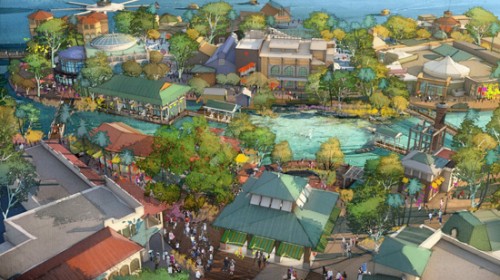 Early this morning, we were invited to a last minute news conference at a special conference room in Downtown Disney. There, Tom Staggs, Chair Walt Disney Parks & Resorts, announced a transformation of Downtown Disney that will double the number of shops, restaurants, and entertainment venues. Disney Springs will involved four neighborhoods – Town Center, The Landing, Marketplace, and West Side. It will open in phases with construction set to begin next in Spring 2013 and scheduled to finish in 2016.

More, including the concept art released today, below the jump:

Beyond the additional shopping, dining and entertianment options, Disney Springs will being over 5,000 new jobs to Central Florida. 1,200 jobs will be involved in the construction and 4,000 new jobs will be created at the venue when it’s complete.

“Disney Springs will be a timeless, vibrant place where Walt Disney World guests and local residents can relax, shop, dine and be entertained in an imaginative setting where they’ll instantly feel at home,” said Staggs. “Featuring distinctive brands, world-class restaurants and unforgettable entertainment, Disney Springs will be brought to life with the same focus on storytelling and attention to detail that goes into our theme parks, resorts and cruise ships, resulting in a welcoming space that only Disney could create.”

Staggs also addressed the idea that had previously been announced for Downtown Disney. He said that they knew they could do better than Hyperion Wharf and they wanted to spend the time to get it right.

If this project doesn’t suffer the fate of Hyperion Wharf, fans will have to live with the loss of Pleasure Island forever. The good news is there will be new entertainment to explore and even less of a reason to venture outside of Disney’s magic bubble. That’s probably how Disney wants it. What do you think?

Update: More details on Disney Springs, including a look at the model used to sell the idea to new tenants.