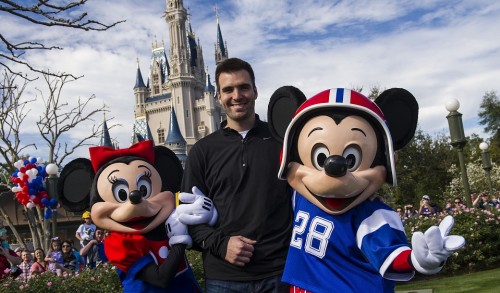 His “I’m Going to Disney World” – anchoring one of TV’s most enduring and iconic Super Bowl commercials – was captured seconds after the final whistle Sunday night. A produced commercial from that moment aired on networks just hours before Flacco’s appearance at the Magic Kingdom.

Flacco’s declaration became the 26th Super Bowl commercial aired in the Disney series that began in 1987 following Super Bowl XXI. The first “I’m Going to Disney World” commercial featuring New York Giants quarterback Phil Simms was considered a groundbreaking concept – a produced commercial involving a current event, airing on major networks within hours of its conclusion. Flacco joins an all-star lineup of heroes from sports and beyond who have celebrated milestone accomplishments in “I’m Going to Disney World” commercials.

Were you at the Magic Kingdom for the celebration? Do you wish you could be?