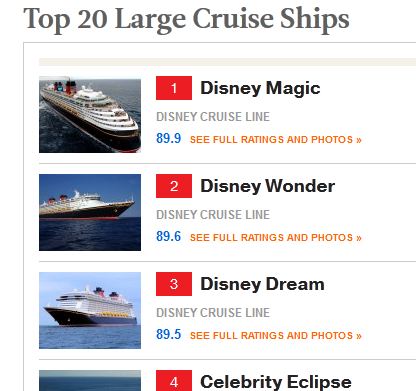 Congratulations to Disney Cruise Line. It’s been voted 4 of the top 10 cruise ships, garnering the top 3 spots in the Conde Nast Traveler readers poll. The Disney Magic earned spot number 1 on in the large ship category in Conde Nast Traveler magazine. The Wonder and the Dream came up 2nd and 3rd and the Disney Fantasy clocked in at number 8. There has to be some reason that the Fantasy was ranked so much lower than the Dream considering they’re basically the same ship, which just a few more water activities and bars added to the Fantasy. I suspect it’s due to the newness of the ship.