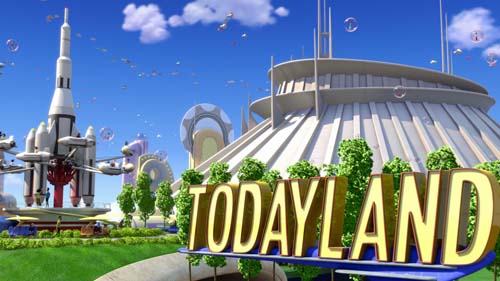 Brad Bird’s live action film gets a name change to something with a theme park tie-in. This according to a brief press release from Disney:

The Walt Disney Studios has announced that its live-action release previously known as 1952 will be titled Tomorrowland. The film will be released domestically on December 19, 2014. George Clooney (The Descendants) is set to star.

Reportedly the plot centers around Clooney’s character after he encounters alien life on earth. It’s unknown if this title means anything for the future of the Tomorrowland area of Disneyland and Walt Disney World’s Magic Kingdom. But both versions of the theme park land are in need of some serious updating and anything to hang a theme on. Alien life has been considered as a new theme for Tomorrowland before (Plectu’s Galactic Review as part of TOmorrowland 2055 for instance).

Btw, has anyone heard anything about “Magic Kingdom” that other theme park movie Disney is supposedly working on (and the Haunted Mansion redo too)?