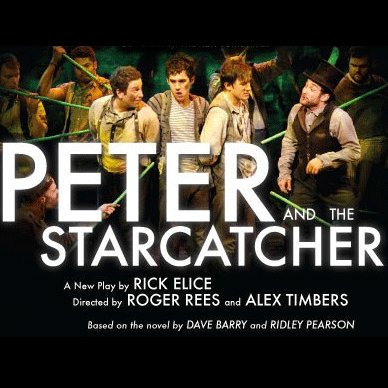 From the moment my dear friend and longtime collaborator and editor Wendy Lefkon sent me the galleys of the yet-to-be-published “Peter and the Starcatchers,” I saw it as a piece of theatre.

It didn’t fully fit the Disney “agenda,” but I just loved it. Some number of years later, after various workshops, a pilot production in La Jolla, an Off Broadway outing, and a brilliant Broadway outing it won 5 Tony Awards and garnered sensational reviews.

The actors who created the roles break my heart and the creative team delivered at a level Producers only dream of. It was directed by the astounding Tony nominated Roger Rees and Alex Timbers. My soulmate, the Tony-nominated Rick Elice wrote the book, and Wayne Barker composed songs with lyrics by Rick.

The astounding Tony Award-winning set of recycled materials (including remnants of “The Little Mermaid”!) was designed by Donyale Werle.

That set was brilliantly lit by Tony Award-winning Lighting Designer Jeff Croiter. (he also did “Newsies”)

The cast was wearing oh-so-worn-and-chic Tony-winning costumes by Paloma Young.

And the deeply complicated sound (you oddly have to see it to believe it) was created by Tony-winning Darren West.

It is never easy to see a show close, but I’m nothing short of astounded that “Peter” had this sensational run on Broadway.

No “stars” no revival status, just brilliant performances in a great show. So much credit goes to Nancy Gibbs, Greg Shaffert, Eva Price and Tom Smedes, who believed so much in what was created that they wanted to join the madness and put it on Broadway.

I hope he doesn’t mind me including it all since it lists and thanks the talented folk involved in bringing the story to the stage. (source)