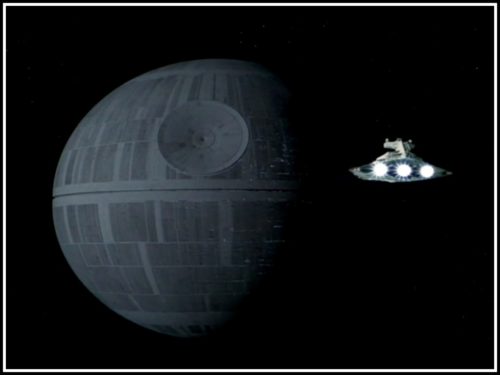 When a petition appeared on the We The People White House site asking, with tongue in cheek we hope, the executive office to respond to the idea of building a Death Star, I sort of chuckled and then didn’t expect anything of it. But when the petition reached the 25,000 signatures needed to ‘force’ the White House to respond, I wondered how it would go down. As it turns out the White House has a sense of geek humor and their response “This is not the petition response you’re looking for” was great. Instead of wasting this opportunity, they turned it into a chance to spread the word about the petition site and some of the great scientific exploration currently underway at NASA, including, as it turns out, a space station.

I thought that was it until today, the official Star Wars blog shared a press release from the Galactic Empire:

IMPERIAL CENTER, CORUSCANT – The overwhelming military superiority of the Galactic Empire has been confirmed once again by the recent announcement by the President of the United States that his nation would not attempt to build a Death Star, despite the bellicose demands of the people of his tiny, aggressive planet. “It is doubtless that such a technological terror in the hands of so primitive a world would be used to upset the peace and sanctity of the citizens of the Galactic Empire,“ said Governor Wilhuff Tarkin of the Outer Rim Territories.

The release went on to claim

Emissaries of the Emperor also caution any seditious elements within the Galactic Senate not to believe Earth’s exaggerated claims of there being a weakness in the Death Star design. “Any attacks made upon such a station — should one ever be built — would be a useless gesture.”