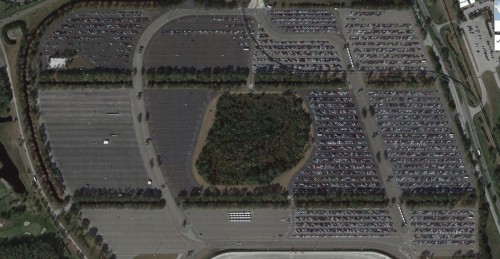 No cameras in this parking lot

The first and last moment of many a guest’s day at the vacation kingdom is an encounter with a huge asphalt parking lot. There, they are parked like sheet metal sardines, seemingly always at the farthest point possible from the tram. At the end of the night, there is the long (and sometimes windy, wet, and/or cold) tram ride back to the car, which hopefully is where they remember it being and not in some other whimsically named section.

So imagine the anguish of a family who returns to their vehicle after a long day of Disney fun only to find someone has stolen pretty much everything from your car. It happens all the time including this story on WESH. Later when security & police arrive, the family learns that this is a regular problem at Walt Disney World with thieves driving the parking lots with special devices that attempt to unlock car doors remotely.

The nature of a family vacation makes these parking lots a target rich environment for thieves. Many a family checks out of their hotel on the last day, but still spends time in the parks before heading back home. For most families there is little choice but to leave your luggage in your car during this process.

Disney has the nerve to charge $15 for parking, but you take your chances that the one or two security officers driving or biking around will be there to prevent any nefarious types from doing damage to or ransacking your car for its possessions.

Now, I don’t mean to imply that Disney is at fault. The owner of the car is responsible for securing any valuables and they take the risk when parking. But I do think it’s ridiculous that after charging you to park there are few security methods employed beyond a couple roving security officers. Especially when there’s criminal activity reported on a regular basis.

We live in an age where every bag is inspected before entering the park — an act of pure security theater because anyone with even slight forethought can think of a dozen ways to get forbidden items in the park. Yet, here we have ample evidence of criminal activity going back years and Disney won’t employ extra security that might end it. Where are the cameras to record movements in and out of the parking lots or attempted break ins? There aren’t any by Disney’s own admission. Disney does not even have regularly occupied observation towers with live eyes that might deter thieves or catch criminals in the act.

Disney could do a lot better in nearly all aspects of their parking lot management. The price is crazy high particularly considering how much you pay for admission and food inside the parks, security is evidently lacking, and safety of guests and cast members is comprised every day due to the nature of the parking lot layout. At some point a family of guests is going to return to their car at the wrong moment and the encounter with the thieves will end in someone getting seriously hurt or worse. At some point, a guest will get hit crossing lanes to reach the tram or by a car coming in to park.

I will give Disney some credit here. They’ve recently been adding coned off pedestrian only walkways in the parking lots. That’s a great first step. Let’s hope there are more changes coming soon. Security cameras and bait cars would be two excellent places to start. Improving safety in the parking lots will go a long way to increasing guest satisfaction.

Do you think Disney should do more to secure the parking lots and prevent auto break-ins?

previousDisney Dining Plan, Is it Worth It?
nextMyMagic+ – NextGen Rollout Questions, Answer, and more Questions