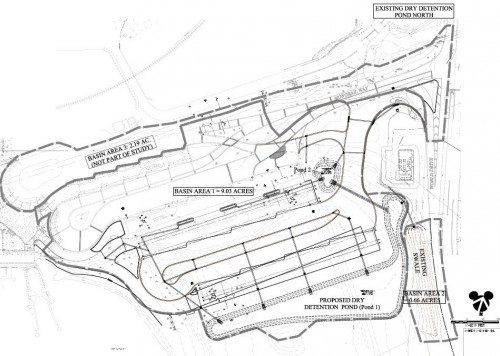 A new Bus Depot at Magic Kingdom to allow for larger buses and therefore more capacity to move guests during peak transportation times at the resort. A recently filing at the local water district shows there will be 8 new load and unload zones added for the new longer buses. Disney will also do some landscaping in the area to allow for a slightly different water runoff pattern.

Update: Apparently at least a few of these stops will include transfer busses directly to Disney’s Hollywood Studios and Disney’s Animal Kingdom. That means guests looking to park hop won’t have to go all the way to the TTC to take another bus. That is indeed a nice change. However, what happens if you park at the TTC and then transfer via bus to DHS mid-day, how do you get back to the TTC at night to get to your car? Previously, your bus would drop you off there. Now you’ll have to walk all the way to the monorail or take a ferry back to the TTC at the end of the night… hard to please everybody, I guess. Might make more sense to bus it to the Polynesian and then walk to the TTC from there. Frankly, this part of the Disney experience has always seemed ripe for re-invention to me. That’s not what we’re getting here. But not every improvement has to be nines and tens. Sometimes just some improved efficiency is okay. Still I would have been more impressed if they found a way that had some show elements to it or something that inspired one about the future. The end result here is still more walking and more queues for guests.