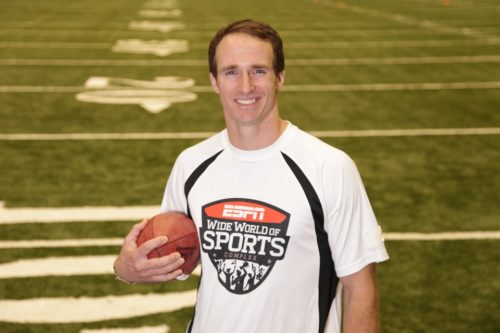 Athletes will have the unique opportunity to immediately put what they have learned to the test by taking part in three days of intensely-competitive 7-on-7 competition, a format which has been widely credited with helping accelerate the development of several current young NFL starting quarterbacks. The 7-on-7 competition will be run by KSA Events, the nation’s premier host of high school sports events.

“When you look at some of the top young players who are having a lot of success early in the NFL, being involved in 7-on-7 programs probably put them ahead of the curve as they moved forward in their careers,” Brees said. “My academy is designed to help more high school kids of all levels get the same type of competitive advantage. Not only will my academy provide these high school kids with NFL-quality instruction, great competition and a first-class sports facility at Disney, but there will also be off-the-field opportunities for these kids that, combined with the football camp, will make this a once in a lifetime opportunity that they will carry with them forever.”

The academy adds to the growing list of events at the ESPN Wide World of Sports Complex which offer youth athletes the opportunity to learn and train with marquee professional athletes and teams. Later this month, for instance, some of the nation’s top high school soccer players competing in Disney’s Soccer Showcase will train with stars from Italy’s famed AS Roma soccer team.

“This academy is unique in that the athletes not only are going to be trained by world-class football players such as Drew Brees, but they will be doing it at a world-class facility,” said Mike Millay, Director of Sports Development for Disney Sports. “It’s the ideal environment for any high school football player looking to take his game to the next level by learning the real art of the passing attack from one of the true masters of the game.”

Teams can sign up for the academy at www.ksaevents.net/drewbreesacademy

Proceeds from the academy benefit the Brees Dream Foundation, established in 2003 by Brittany and Drew Brees to help improve the quality of life for cancer patients and provide care, education and opportunities for children and families in need.