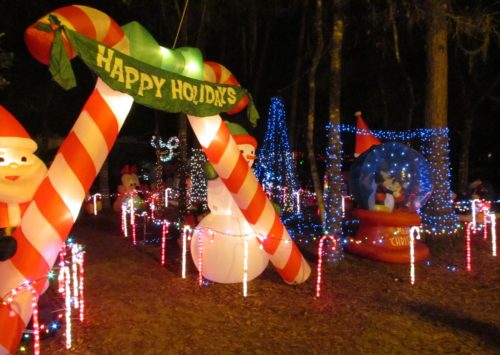 If you’re reading this blog, you probably know about the Osborne Family Spectacle of Lights at Disney’s Hollywood Studios, but did you know there is another display of Christmas lights at Walt Disney World that is, in its own way, nearly as impressive. This display takes place in the campground of Fort Wilderness where RV Campers combine their love of Disney and Christmas in dozens of small but heartfelt displays of Disneyfied holiday spirit.

We’re still a few weeks shy of Christmas, but already Fort Wilderness is filling up with these campers, so we went for a stroll on Friday night to take in some of the displays of 2012. There were small displays, inflatable forests, shrines to Disney, and even some irreverent ones. But it was all in good fun and a great way to spend an evening at Disney World.

We’ve put photos of a few of the outstanding displays up in a gallery over on Google+. Maybe you’ll find some inspiration for your own yard.

According to our guide, it will only get more impressive as the calendar gets closer to the 25th. For many families, this is an annual tradition, not just to put up the displays, but to enjoy some Disney magic with fellow travelers.