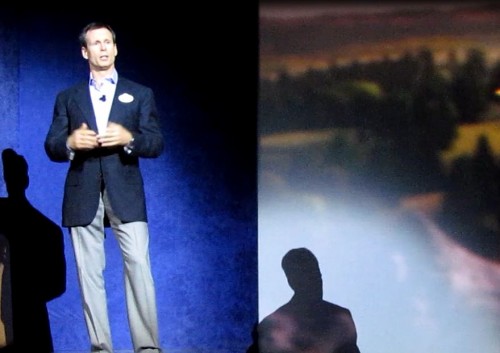 Last night, the media was invited to get acquainted with New Fantasyland expansion at the Magic Kingdom at a special party. When Tom Staggs moved from Disney CFO to Chairman of Walt Disney Parks & Resorts he played an important role in moving the expansion away from a princess and pixie dominated attraction mix and into the more balanced mix of attractions it will become when the Mine Train opens in 2014. So it was great to have him give an introduction to the expansion, even if reading off the teleprompter isn’t quite second nature to him yet.

The presentation featured a few clips of Imagineers sharing their excitement for the land and a special new computer simulation of what riding the Seven Dwarfs Mine Train roller coaster would be like.

Here is the presentation given to the media in its entirety. If you just want to see the new version of the virtual Seven Dwarfs Mine Train Ride, I’ve highlighted that in it’s own video below the jump

That was it. The media will get a larger presentation on what’s new and what’s next on Friday morning. So stay tuned.

The mine train coaster will combine elements of a classic Disney dark ride with the thrill of a ground hugging coaster with a one of a kind (Disney has a patent) ride experience of a swinging mine car. Should be a lot of fun and a unique Disney experience.