Sofia The First and other Disney Channel reviews 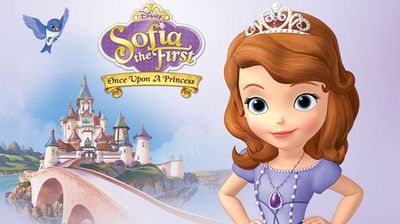 November 18th was the premiere of “Sofia The First: Once Upon A Princess”, the TV movie that introduced the world to Sofia and is the precursor to the series coming to Disney Junior in January. Starring Ariel Winter, Sara Ramirez, Tim Gunn, Wayne Brady, and a slew of others, the show takes place in Enchancia, a land where Sofia’s mother has just married the king, thus making her a princess.

In the film, it goes through her trials and tribulations of becoming a princess, though she feels as if she doesn’t fit (which was explained in song, a welcome surprise for the film). In response to her tepidness, her new father gives her an amulet that for every good deed she does, will give her a gift in return (for example, she puts a baby bird back into its nest…gets the ability to talk to animals). She also has to deal with a mean step-sister (shocking, I know), an evil sorcerer (with a raven voiced by should-be-Disney-Legend Jim Cummings), and going to school at Royal Prep, the academy where all new royalty goes to study such things like manners and etiquette (with the teachers being Flora, Fauna and Merryweather, also a nice addition to the movie). 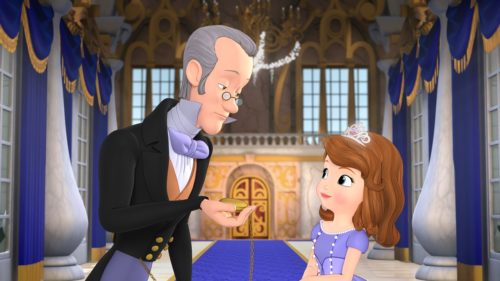 The voice cast is very nice throughout the show. Tim Gunn’s butler figure matches perfectly with that signature Tim Gunn voice (and he even says Make It Work! I was so happy to hear that!) and is a nice character. Sara does a great job as the loving and kind mother figure, while Ariel is a wonderful addition to the princess line up (which I assume will be official in a year or two). The standout, however, is Wayne Brady as the bunny Clover. A very funny role that brings humor to the show (and some great songs, his was the best of the bunch). Of the others, I also enjoyed hearing Ashley Eckstein’s voice as one of the talking birds (she is also known for her roles on The Clone Wars and That’s So Raven).

Overall though, the story was nice. A great film for kids and grown-ups to watch together. I am excited to see where the show takes off from here (since one of the other powers the amulet holds is that when Sofia is in trouble, another princess comes to guide her in a Star Trek Beam-Me-Up sort of way, a cool idea) and to see if it becomes the mega hit Jake and the Neverland Pirates is. I will be watching, though I am 16, to see how much it lives up to this wonderful film. I give this film an A!

Here is the link to the full movie so you can watch for yourself!

Before I go, just some other Disney Channel quick-takes.

Are you excited for Sofia The First as a TV Show? What did you think of the music from the film? Don’t you want a sequel to That’s So Raven too? Let me know in the comments below! Next month, get ready for A TON of 25 Days of Christmas coverage from me throughout the month! Until then…Have a Magical Day! (And a Happy Thanksgiving!)

6 thoughts on “Sofia The First and other Disney Channel reviews”