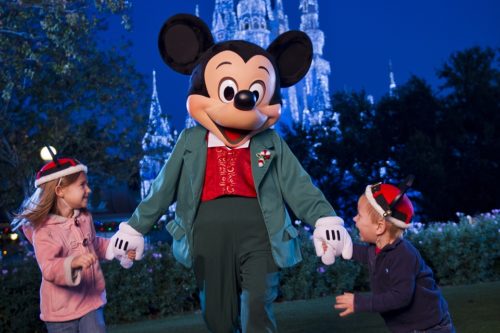 Walt Disney World is out with its annual list of activities for the Christmas season at the parks and resorts. At first glance, it’s not all that impressive of a list. There’s nothing major that’s new and many of the favorite activities from former years remain retired. That said, there’s still nothing as magical as Walt Disney World when it’s decorated for the winter holidays. There may be less of it, but it’s still head and shoulders over what is offered by most of its rivals.

Visitors to Walt Disney World will be able to experience some of the yuletide glow as early as November 9. There’s also an extra night of merry at the Magic Kingdom with 20 nights of Mickey’s Very Merry Christmas Party; and at Epcot, Candlelight Processional. Here are some additional highlights:

Mickey’s Very Merry Christmas Party will have its longest-ever run with 20 magical nights from November 9-December 21. For a quarter century, Walt Disney World guests have been mesmerized by this must-see event, a grandly festive tradition immersing families in the holiday spirit. Dates for 2012: Nov. 9, 12, 15, 16, 25, 27, 29, 30 and Dec. 2, 4, 6, 7, 9, 11, 13, 14, 16, 18, 20, 21. Beginning at 7 p.m. (after regular park hours), guests with special event tickets to Mickey’s Very Merry Christmas Party can enjoy all the holiday splendor with lively stage shows, spectacular fireworks, a unique holiday parade and favorite holiday traditions including complimentary cookies and hot cocoa, and snow flurries on Main Street, U.S.A. For more information, visit www.Disneyworld.com/Christmasparty. NOTE: this is a hard ticket special event after regular park hours; purchasing tickets in advance is highly recommended.

Entertainment, Fireworks and More: Santa’s elves have transformed the Magic Kingdom into a winter wonderland with festive wreaths, bows, garland, sparkling lights, parades and towering Christmas trees. The fun includes the Holiday Wishes nighttime spectacular: Celebrate the Spirit of the Season fireworks, plus live entertainment with Disney characters all dressed up for the holidays.

Castle Dream Lights on Cinderella Castle: Cinderella Castle transforms into a glimmering ice palace for the holidays — thanks to a special effects spectacle bathing the castle in 200,000 shimmering white lights. Magic Kingdom guests are treated nightly to the dramatic castle celebration and stage show.

Candlelight Processional is a timeless holiday offering at Epcot that combines seasonal music with the poignant reading of the Christmas story by a celebrity narrator, accompanied by a mass choir performing seasonal melodies, and a 50-piece live orchestra nightly November 23 – December 30, at 5, 6:45 and 8:15 p.m. Crowd favorites Neil Patrick Harris and Gary Sinise return to America Gardens Theater stage on select nights. Guests can purchase a Candlelight Dining Package, which combines lunch or dinner at select Epcot restaurants with guaranteed seating for the Candlelight Processional and VIP viewing of IllumiNations: Reflections of Earth.

Holidays Around the World: Storytellers from around the world share traditions and lore from their homeland throughout World Showcase. The merriment continues with meet and greets with Santa and Mrs. Claus, plus the nightly “IllumiNations: Reflections of Earth,” laser, light, fireworks display capped with a seasonal finale.

The Osborne Family Spectacle of Dancing Lights: This massive seasonal display features millions of dancing lights, plus animated displays and 3-D effects perfectly synchronized to electrifying holiday tunes amidst snowfall. The rich tradition takes place on the Streets of America, dazzling guests from Nov. 9, 2012 to Jan. 6, 2013.

Celebrate safari style as Disney’s Animal Kingdom is wilder than ever this winter season. Mickey and his pals rejoice in traditional holiday music with a world beat twist during the daily “Mickey’s Jingle Jungle Parade.”

Get all your Christmas shopping done at Downtown Disney during Festival of the Seasons. The shopping mecca is draped with yuletide cheer, plus live entertainment, holiday carolers, a lively street party, plus photo ops with Santa and Santa Goofy.
Walt Disney World Resorts