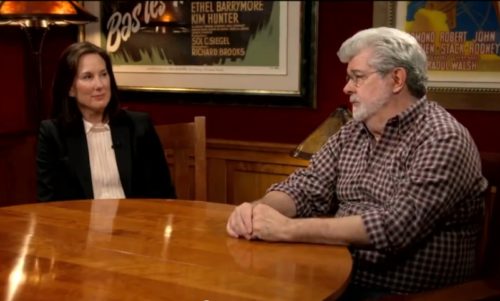 The acquisition of Lucasfilm by Disney will see George Lucas move on to an advisory role while veteran producer Kathleen Kennedy take the helm as President of the division. On October 19, 2012, both sat down with the director of PR and Lucasfilm veteran Lynne Hale for a historic conversation. The deal had been building since the debut of Star Tours: The Adventure Continues a year and a half ago. Since then George and Kathleen had been working in secrecy on the deal including planning for new Star Wars films.

There is a lot of similarity between Lucasfilm’s relationship with the fans of Star Wars and Disney’s relationship with its fans. However, I’ve never seen Bob Iger sit down to just discuss the future of the company in what is essentially a video podcast, so Disney has something to learn from Lucasfilm too. More videos in this series are promised.