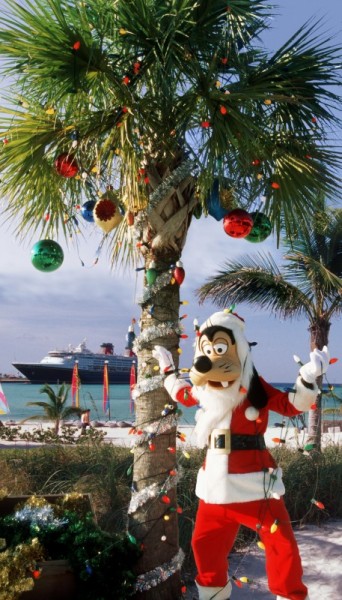 I include the Frost family among the many families who make a pilgrimage to Disneyland or Disney World around the holidays as part of a family tradition. But I also know a fair number of families and friends who make an effort to take on of the Disney Cruise Line’s special holiday themed voyages as well. With the list of entertainment released this week, I can’t say I blame them.

Special stem-to-stern holiday events begin in December during each of the cruises and include:

When the Disney Fantasy, Disney Dream and Disney Wonder stop at Disney’s private island in the Bahamas, Castaway Cay, during the holidays, the celebration continues with “snow flurries,” decked-out Christmas trees, Disney character meet-and-greets, holiday carolers, and holiday-themed activities and crafts for children. For an extra sprinkle of holiday joy, mini Christmas trees decorated with ornaments, white mums, red berries, mini carnations and a bow topper, in addition to special holiday-themed gift packages and treat baskets, are available for purchase prior to the voyages for stateroom delivery. Plus, during the holiday cruises, Disney Cruise Line’s first-ever holiday merchandise collection, along with the ever-popular Disney Cruise Line ornaments, will be available onboard in the gift shops.

To celebrate the new year, the Disney Magic departs on Dec. 29 for a six-night Western Caribbean itinerary with stops at Key West, Costa Maya and Cozumel; the Disney Wonder departs Dec. 30 for a six-night Caribbean cruise calling on Key West, Grand Cayman and Cozumel. The Disney Dream sails a five-night Bahamian cruise that departs on Dec. 28 and features two stops at Castaway Cay and one day at Nassau; the Disney Fantasy sails a seven-night Eastern Caribbean cruise that departs on Dec. 29 with stops at St. Thomas, San Juan and Castaway Cay. These voyages include a special New Year’s Eve party to ring in 2012, complete with music, sparkling wine in commemorative flutes and a midnight countdown.

Christmas by the Numbers on the Disney Dream

Garland, wreaths, twinkling lights and glitter transform Disney Cruise Line ships into a winter wonderland during the holidays. On the Disney Dream alone more than 300 custom designed décor pieces adorn the ship, including:

Unique holiday décor is created for specific locations around the ship. Themes include bright colors in the kids’ clubs, holographic foliage for the teen and tween spaces, and elegant accents for the adult areas. Customized ornaments include a paint brush and palette in Animator’s Palate, Mr. Potato Head in Oceaneer Club and colorful tropical fish in Cabanas.