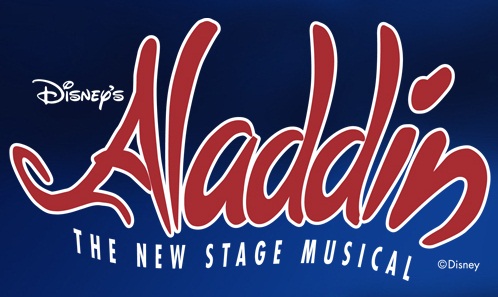 After a record setting run at the Muny in St Louis and a similarly strong performance at Utah’s Tuacahn theater, Disney’s Aladdin – The New Stage Musical is headed to Broadway. This, at least, according to Alan Menken, who spoke at ‘Destination D’ last week in Anaheim.

This version of the stage show started as a pilot program in Seattle, not really designated for a trip to Broadway, but instead for local amateur theaters. It features songs that were written for the movie, but cut for various reasons. The book is by Chad Beguelin, music by Alen Menken and lyrics by Howard Ashman and Tim Rice. Beguelin also contributed additional lyrics to this production.

Production photos from the Tuacahn show reveal it to be a very colorful production on a huge stage. The show includes special digital projection effects where the audience is asked to put on 3D glasses during the cave of wonders scene. We’ll see if that makes it to the Broadway version of the show.

If the idea of Aladdin  – The New Stage Musical intrigues you further there is an excellent blog chronicling the shows life and run to Broadway.