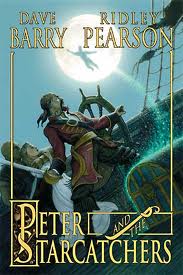 I’ve been a fan of director Gary Ross’ work since his directorial debut in Pleasantville (about a brother and sister transported to a television world of black and white and a powerful metaphor for discrimination in America). Ross started out as a writer and he brings a powerful sense of story to every film he directs.

His most recent project, you may have heard about it, was the film adaption of “The Hunger Games.” But Ross is leaving that series to come work on the Disney movie adaption of “Peter and the Starcatchers.” The book by Dave Barry and Ridley Pearson tells the backstory of Peter Pan and functions as a prequel to the Peter Pan stories. It’s already been adapted for the stage and is a success on Broadway having just won 5 Tony Awards.

Ross’ considerable talents should be able to take this fable and bring it to audiences in a way that evokes the traditional Disney story where both adults and children are entertained. I can’t wait.