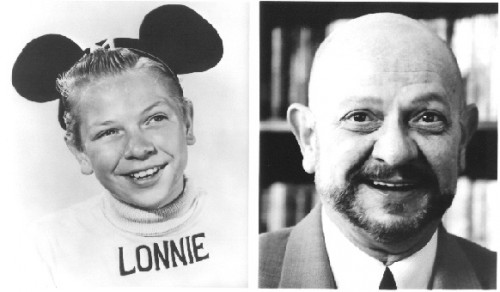 Mark Hickson of the fabulous Disney By Mark blog has a long and ranging interview with one of Walt Disney’s original Mouseketeer’s Lonnie Burr. In it the two reminisce over celebrities they both know, time spent with the Sherman Brothers and brag a bit over who was dating who among the Mickey Mouse Club.

Bill and I got in touch with the Hollywood Chamber of Commerce to try to get her Hollywoodstar representation for wall hanging but at first they wanted to charge money for it! I also got in touch with Disney’s archives which helped get her a statue of Walt and Mickey that had melted when their house went up in flames.

and on the death of the great Bill Justice:

After Bill died, I found that the New York Times had failed to file an obituary for this famous Disney legend that was nominated with a partner for 4 Oscars and won one. I talked to an editor and he said it was just one of those things – they only had space for three and he had not fit in – so much for “all the news that is fit to print.” It bugged me and I told them so.

previousSeaWorld Returns Trainers to Water with Killer Whales, but only Off-Stage
nextD-Tech Me Technology Returns to Disney World For Princesses