Un-seen Disney Animation: My Peoples, plus the saga of Disney’s Florida Animation Studio 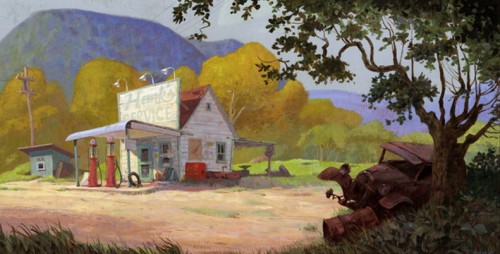 Before a film can enter production at Disney animation, it first has to be pitched. A small number of those films make it into pre-production, and then an even smaller number actually make it into full production. At that point, the film is most likely going to end up in a theater somewhere. The film “A few Good Ghosts” (also known by “My Peoples” along with a number of other titles) was an exception to that rule.

The story of how “My Peoples” came to be is tied closely to the Walt Disney Feature Animation Florida Studio. And Animation Director Barry Cook, who was intimately involved with the operation of the studio sat down with Animated Views to tell the story.

Mulan was the first feature animated film to be created almost exclusively in Florida. Cook was the co-director and basically devoted 5 years of his life to the film. After it was released he was burned out.

As Disney began to release Mulan internationally, Cook visited Studio Ghibli, where he met its co-founder, Hayao Miyazaki. But Cook had a personal confession for the master Japanese animator and director. “I told him, ‘I’m really burned out,’” recalls Cook. Miyazaki offered an encouraging response: “Stick with it. Animation is a great way to spend your life.”

The completion of Mulan, which won an Annie and was a small hit for Disney at the box office, was actually the beginning of the end for WDFA Florida, although nobody knew it at the time. It’s a fascinating story told in more detail than I’ve ever read.

After WDFA Florida closed a few animators went back to California, but many stayed in Florida. I’ve met a few of them and think it’s still possible that Orlando could again host a Feature Animation Studio, perhaps even one owned by Disney. Would you like to see a working animation studio inside Disney’s Hollywood Studios again?