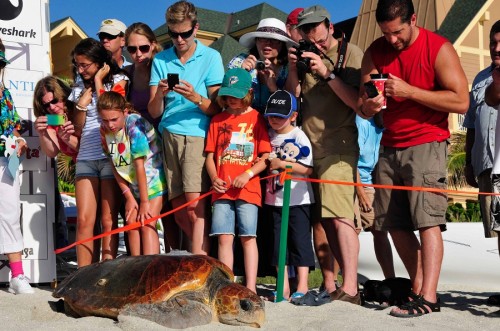 Ladies and gentlemen, get your bookies on speed dial. Disney has entered two Finding Nemo inspired Loggerhead Sea Turtles in the “Tour de Turtles: A Sea Turtle Migration Marathon,” which is actually a cleverly disguised research project to help gather data needed to protect the turtles. Fans at Disney’s Vero Beach Resort will be able to cheer on “Peach” and “Pearl” as the two loggerhead sea turtles return to the Atlantic Ocean to compete in the annual Turtles Migration Marathon.

Peach is sponsored by Disney’s Animal Programs and Disney’s Vero Beach Resort, and Pearl is sponsored by the Disney Worldwide Conservation Fund and Disney’s Friends for Change. Joining them in the “marathon race” will be 12 other turtles starting at various locations. As all 14 turtles travel from their nesting sites to unknown feeding grounds, researchers will track them by satellite technology gathering vital information that will help conservationists and governing agencies make informed decisions about conservation methods and policies.

The turtle that swims the furthest distance will be named the winner. Audiences worldwide will be able to view the sea turtles’ progress online at www.tourdeturtles.org and watch the marathon unfold.

“The marathon is important on the larger level because the CCC shares information with the National Marine Fishery Services which controls where people fish”, said Anne Savage, Conservation Director of Walt Disney World Programs. “This will help determine where turtles swim in relation to where boats are, and to use that information to regulate the amount of time that people stay in those areas keeping the turtles out of danger.”

During the marathon, each turtle will represent a “cause or threat” to their survival. Pearl’s mission is to raise awareness on the entanglement effects caused by pollution, fishing lines and fishing nets. Peach’s mission is to raise awareness on the effect of light pollution. Since sea turtle hatchlings rely on moonlight to find their way to the ocean, many become disoriented and drawn off-course by artificial light sources.

Among the oldest creatures on earth, sea turtles have remained essentially unchanged for the past 110 million years. In the United States, as much as 90 percent of sea turtle nesting occurs in Florida, which serves as home base for several species of endangered and threatened sea turtles. With as few as one out of 1,000 hatchlings surviving to adulthood, conservation efforts must focus on combating human-caused threats through education and research.