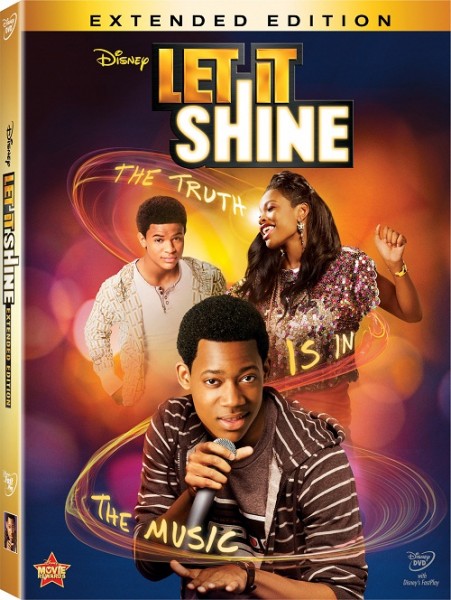 The Disney Channel has had a string of successes with its Disney Channel Original Movies. The latest to enter the line up is the energetic and music-driven “Let It Shine.” For those who want to add it to their personal collection, a new version with an exclusive extended music scene is coming to DVD as a 1-Disc DVD (DVD + Digital Copy on the same disc) on August 7, 2012 but you can pre-order it now and save over 40%.

Celebrating family and friendship, the story unfolds in Atlanta, Georgia, as Cyrus DeBarge (Tyler James Williams) and his best friend Kris McDuffy (Trevor Jackson) reunite with their childhood friend, teenage singing sensation Roxanne “Roxie” Andrews (Coco Jones), whose music label is sponsoring a songwriting contest at a teen club. Cyrus, who writes music under the name “Truth,” crafts a heartfelt and contest-winning rhyme about Roxie but to his dismay, his work is mistakenly attributed to Kris. Lacking the confidence to step forward, Cyrus stands by while Kris not onlytakes credit for the lyrics, but ultimately begins to win Roxie’s heart too. Now, it’s up to the true poet to overcome self-doubt, seize the opportunity to reveal his authentic self, and pursue his dreams. At the same time, Cyrus must convince his preacher father (Courtney B. Vance) that hip-hop music can convey a positive message.

Available only on the “Let It Shine: Extended Edition” DVD is the exclusive extended scene featuring Cyrus in his first-ever rap battle of the rhymes against his nemesis, Bling, to establish which performer is the more talented verse master. The truth is in the music!

“Let It Shine” is directed by two-time DGA award winner Paul Hoen (“Camp Rock 2: The Final Jam,” “JONAS”), written by Eric Daniel and Don D. Scott (“Barbershop,” “Barbershop 2: Back in Business”) and choreographed by Danny Teeson (“American Idol”) and associate Brandon Shaw (“So You Think You Can Dance,” NAACP Image Awards). A production of G WaveProductions, LLC., the movie was shot on location in Atlanta and Marietta, Georgia.