Probably not all too shocking for those who know me: I am a bit of an audiophile. Specifically, I enjoy listening to music from the Disney Parks; after all, they are some of the few places on Earth where your life has beautiful background music wherever you go! From the moment you step into the park until the moment you leave, you are surrounded by some amazing scores and sounds that magically morph as you stroll from one location to the next. After all, Disney is known for the details, and the music composed for the parks is no different. As much thought goes into the themes, instrumentation, and timbres as can be said for details in the architecture, technology, and storytelling goes into the attractions. Unfortunately, many of the musicians who imagineer these aural attractions remain relatively unknown to the majority of park guests. Well, that’s where I’m about to step in. 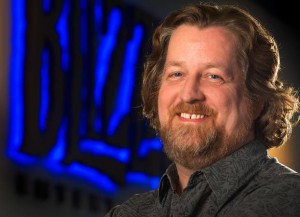 One of my blogging goals has always been to explore those composers who help create the music, and I decided to start with what is perhaps my favorite pieces of park music: the Future World/Innoventions Area Loop heard in EPCOT. Whether crossing from Mission: Space over to Soarin’, Spaceship Earth over by the Fountain of Nations, or simply stopping to enjoy a Mickey bar and soak in the ambiance of Future World, this is my go-to track whenever I’m looking to take a mental trip back to my happy place. I figured if I was going to start my exploration of the musicians who create the “magic” via background music, it was going to be here, with this loop composed by Russell Brower. The amazing thing is once I discovered Mr. Brower was on Twitter, he was gracious enough to share a bit of his story as well as the story behind this awesome music!

Musically, Brower got his start with a little bit of piano and a lot of singing in choirs. He also credits his father: “My father was an audiophile, and exposed me to great film and classical music early on.” Beyond his early musical experiences, Brower’s youthful ambition was to become an Imagineeer with Disney. From the age of four he dreamed of working for Disney, and then just four days after finishing high school, he started working at WED Enterprises (former name of Walt Disney Imagineering) as a Show Design Trainee doing storyboard sketches, drafting and project mockups.

After working in show design, followed by a 13-year foray into television and film sound, Brower returned to Imagineering as a Principal Media Designer and began composing and supervising background music for many different Disney Parks attractions and areas. Some of the other projects to which he contributed while with Disney include the original Living Seas area music, music for Tokyo DisneySea, as well as many sound effects for Disneyland Paris, most notably Pirates and Phantom Manor. Although he created a great number of original works for Disney, he maintained a particular affinity for EPCOT Center and put a great deal of that appreciation into the creation of the Innoventions Area Loop. 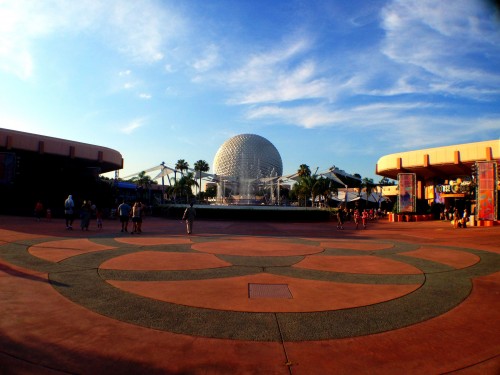 The Innoventions Area Loop was composed in 1994 and is still used today throughout Future World, though not in its entirety. Brower used the David Arkenstone piece “Papillon Day- On the Wings of a Butterfly” as a “flavor” example in order to get approval and to proceed on the project. Once approval was granted, he “stared at a model of the revised FW area at WDI, and the music came to [him].” Greatly inspired by the 1982 medley, he composed and recorded the Innoventions Area Loop in just five days at his home, using different synthesizers (Korg Wavestation, Memorymoog, Oberheim Xpander, Emulator III or IV, and Casio CZ-101 to be precise). The full loop Brower composed (approx 60 min. long) featured arrangements of all the different pavillion themes from throughout Future World, however the loop we hear today is a shortened version that features mainly the central theme of the loop interspersed with other selections (approx. 20 min. long). When asked if he would update or change the loop at all with any new technology or sounds today, he said “I would just replace the samples with live instruments… Maybe a little Electronic Wind Instrument, which would tie it back nicely to the original which had that.” (How cool would that be?!)

Today, Brower (no longer with Disney) works on a number of other different musical projects, including the soundtracks to such popular video game series as World of Warcraft, Diablo, and StarCraft. Regarding his current projects, he describes it as a “complete change in scope and musicality, [but the] same storytelling…WoW is like a theme park.” Some of his favorite current project tracks include “Grizzly Hills” and “Invincible” from WoW, “Leah” from Diablo, and “Wings of Liberty” from StarCraft.

While the Innoventions Area Loop is one of my personal favorites, the truth is Mr. Brower is only one of many composers and musicians whose work creates the immersive environment that many Disney Parks fans the world over have come to enjoy. So here is my suggestion: The next time you find yourself strolling through a Disney Park on your way from one attraction to the next, or getting frustrated by long lines or spilled ice cream, try something new. Instead of “stopping to smell the roses” (while that cliche works very well in the Magic Kingdom Rose Garden), why not stop to find a bench and take in some of the fantastic music that was composed specifically for us guests while we are in that very spot? If you do take the time to soak in the sounds, you too may discover a new “attraction” in all the music that surrounds us while visiting. The best part? You can bring food/drink on board and there’s never a line. :)

A BIG thank you goes out to Russell Brower, who indulged all my questions in 140 characters or less. Thank you for taking the time to chat with a fan, and share not only your experiences with me, but your storytelling talents through music with everyone who steps foot in the Disney Parks!

5 thoughts on “Getting to know Disney Music Maker Russell Brower”