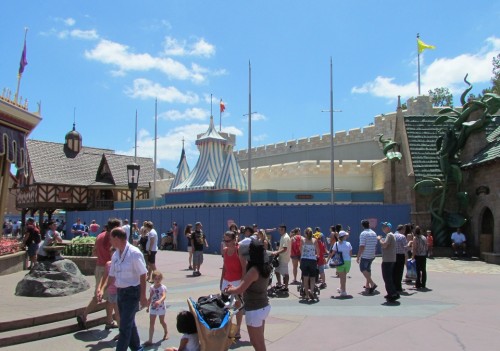 The latest tour de force from the amazing Passport to Dreams website is a thorough examination of Snow White’s Scary Adventures at the Magic Kingdom. From a reconstruction of the 1971 version to the influence it had on the 1983 remake of Disneyland’s Fantasyland, this blog post has it all.

Around the corner, a number of forest animals are clustered in an open window, looking off to the right in alarm – another repetition of the ride’s structuring motif of an indirect lead-up to an uncanny event. The next scene is uncanny indeed — it’s probably the most bizarre thing to ever appear in a Disney dark ride.

All seven dwarfs appear to the right ascending the cottage stairs. Dopey, holding a candle in his shaking hand, is being prevented from fleeing the scene while Doc, leading the way, is protectively holding the rest of the dwarfs back near the top of the stairs. In the upper landing, an upstairs door is open, from which spills yellow light and the huge rippling shadow of a looming ghost!

With Snow White’s Scary Adventure currently closed to make way for a Princess meet and greet and the Seven Dwarfs themed coaster still a few years off, I was reminded of the old saying, you never know what you have until it’s gone. So true, we just don’t see attractions like that any more.

previousDisney at Comic-Con 2012: What to Look Forward To
nextBrave Strong At Box Office On Second Weekend