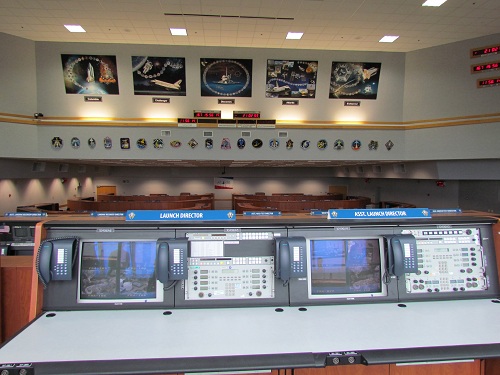 The most important person in Firing Room 4 was the launch director, who oversaw the entire process and made the final call on whether a launch was a “Go” or “No go.”

“With so much on the line, the people who worked in this room were under tremendous pressure not only in daily operations but particularly as the countdown proceeded,” said Bob Sieck, former launch director, Kennedy Space Center. “They had to handle the tension and their emotions as the tests became faster, the astronauts took their place in the shuttle and thousands of people and news media were gathered outside to watch the launch.”

The LCC Tour opens June 15 and will run through the end of 2012 with a limited number of daily tours. NASA and the Kennedy Space Center Visitor Complex recently extended another behind-the-scenes tour through the end of the year. That tour, which began in November, takes visitors inside the 525-foot-tall Vehicle Assembly Building (VAB), the massive building adjacent to the LCC where the Apollo Saturn V rockets and space shuttles were assembled. A model of the LCC and VAB. On the back wall are plaques with patches commemorating every launch at KSC.

As with the VAB, visitors have not had access to the LCC since the 1970s, during the period after the Apollo and Skylab programs ended and before the first space shuttle launch in 1981.

“This is another very rare opportunity that NASA has worked with us to provide – access to the Launch Control Center,” said Bill Moore, chief operating officer of Kennedy Space Center Visitor Complex. “It might be another 30 years before guests will receive a behind-the-scenes opportunity like this again.” 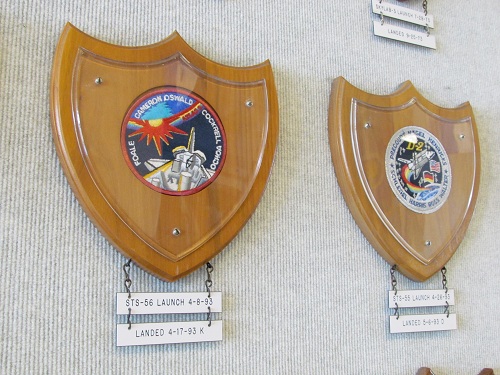 A few of the hundreds of patches. Each patch features special iconography added by the astronauts on the launch.

The LCC will continue to operate in guiding the next generation of rocket launches from Kennedy Space Center for NASA and potentially for commercial space programs. Future launches of SpaceX, whose recent launch from nearby Cape Canaveral Air Force Station resulted in the first mission by a commercial company to travel to and dock with the International Space Station, could take place from Kennedy Space Center beginning in 2013.

The LCC Tour is led by a trained space expert, giving visitors an insider’s view of the space program from launch preparation to liftoff. The tour also includes drive-by views of Launch Pad 39 and culminates at the Apollo/Saturn V Center, where visitors can resume the regular tour. Price is $25 for adults and $19 for children ages 3-11 plus tax, in addition to admission. The tour will also showcase the LCC’s lobby, which features 152 wall plaques – one for every mission guided there since the first, the unmanned Apollo 4 in 1967. Included are the manned Apollo moon missions, the Apollo-Soyuz Test Project in 1975, the Saturn V launches for Skylab in the mid-1970s, and the launches for the 30-year Space Shuttle Program.

The LCC is also listed on the U.S. National Register of Historic Places and won an architectural award for industrial design from the American Institute of Architecture in 1965. The lead architect, Martin Stein, said the building’s prominent windows overlooking the launch pads of Launch Complex 39, where all of the shuttles and Saturn V rockets were launched, made a statement as windows “through which you could see mankind’s future.”

Visiting During the 50th Anniversary 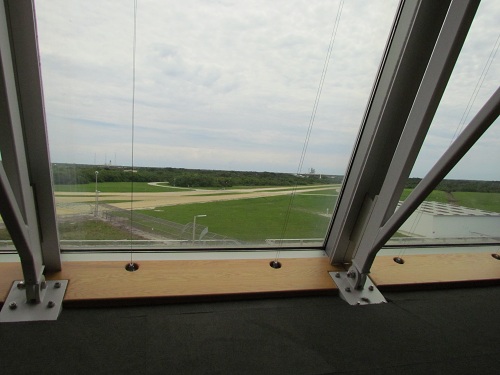 From the earliest days of America’s storied space program, Kennedy Space Center has captured the world’s attention and fed its imagination as the epicenter of mankind’s greatest adventure. Its remarkable collection of rockets, launch pads, NASA aerospace technology components and rocket launch viewing opportunities offer authenticity and access unlike any other Central Florida destination.

Kennedy Space Center Visitor Complex features many attractions and year-round interactive programs, including meeting real astronauts. The regular bus tour, included with admission, explores the history of the Apollo moon and space shuttle programs with panoramic views of launch pads and the VAB’s exterior and stops at the LC-39 Observation Gantry and the Apollo/Saturn V Center, where visitors see a fully restored, 363-foot Saturn V moon rocket and relive the historic Apollo missions that saw man land on the moon.

In addition, Kennedy Space Center Visitor Complex is the future home of the space shuttle Atlantis, with a multimillion-dollar exhibit expected to open in July 2013.