Warning, spoilers for Pixar’s Brave are below 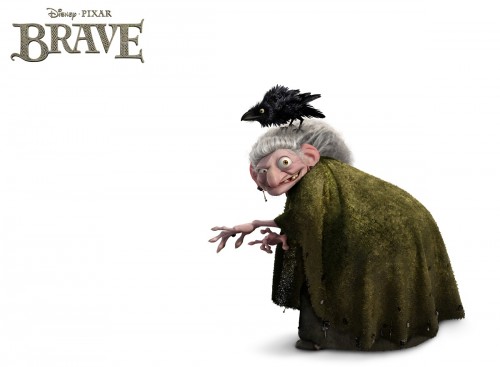 For all the secrecy Disney marketing built up around the Witch character, it turns out she’s not all that involved in the majority of the film. Yes, she provides an important twist to the plot, and some much needed humor after a serious moment in the film, but there was really no need to hide this element of the story. It’s a fairytale, we expect there to be a witch.

Pixar has never been afraid to tell new stories, so don’t expect the witch to be a traditional witch either. This one owes more to the stories of great Japanaese animator Miyazaki than a traditional western witch.

Here’s an clip with a little bit of the witch’s potion making session of the film.

Now that clip does contain the one thing in the movie I disliked because it took me out of the film. The face shields were anachronisms for the time period of the film and, while the gag of having a set for the bird, but not Merida made me chuckle, it wasn’t consistent with the rest of the story.

Are you planning to see Brave this weekend?