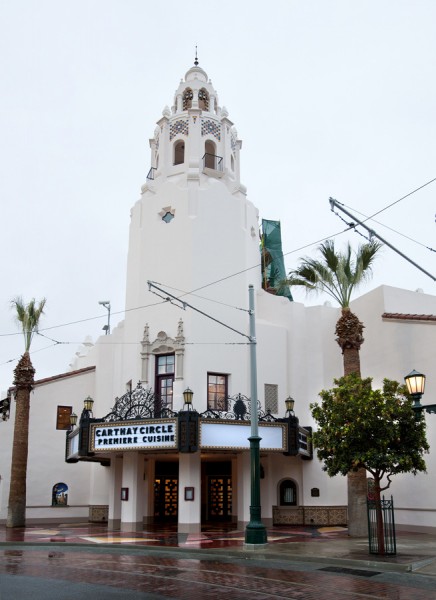 36,000 – Approximate number of miles per year each Radiator Springs Racers vehicle will travel, equivalent to more than 14 trips down the original Route 66

525 – Approximate length, in feet, of the Route 66 that runs through Cars Land

89.5 – Height in feet of the Carthay Circle Theatre on Buena Vista Street – 12.5 feet taller than Sleeping Beauty Castle at the end of Main Street, U.S.A., in Disneyland Park

20 – Number of passenger seats on each Red Car Trolley, with additional space for a wheelchair

623 – Number on one of the Red Car Trolleys, representative of the 600 series of trolley cars built for the Pacific Electric Railway; also reflects 1923, the year Walt Disney first arrived in California

717 – Number on the second Red Car Trolley, representative of the 700-750 series of trolley cars built for the Pacific Electric Railway; also reflects July 17, the month and day Disneyland opened in 1955

1923 – Year listed on embedded plaque at Storytellers statue at Disney California Adventure, reflecting the date when Walt Disney left Kansas City to embark on his new adventure in California and the year he founded his world-famous company

Which of these numbers impresses you the most?