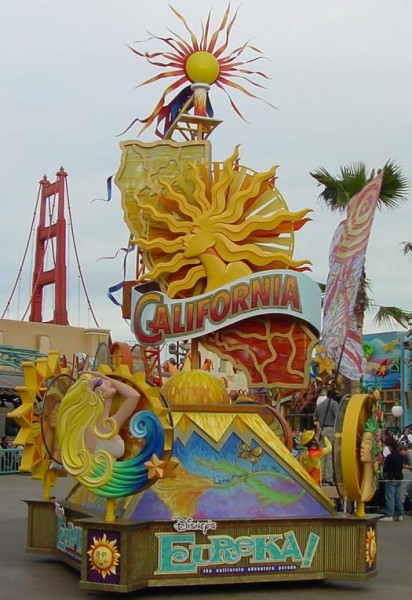 July 4th 2001 the show came back from the Disney Parks graveyard. Though it didn’t bring in the people, it did bring smiles to the people that did see it. After leaving following the huge “Glowing Away” campaign given to its departure in the 90’s, people thought they would never see it again, but you know what they say…when you have a dying theme park, you bring back anything you can! The show had a large update in 2009 with the addition of a Disney Fairies themed lead float (And the subtraction of the Blue Fairy lead float), the 7 Dwarves’ Mine Train float, updates to the music and lights, and fairy dust trails lining all the floats. The parade “Glowed Away” for a second time in 2010 as it headed for WDW. It was (kind of) replaced by “Glow Fest” and “World of Color”.

Premiering in 2005 as part of Disneyland’s 50th Anniversary was “Block Party Bash”. Not as much of a parade as a street party, this Pixar extravaganza had you dancing with your favorite Pixar characters to your favorite dance songs. Featuring floats from “Toy Story”, “A Bug’s Life”, “The Incredibles” and “Monsters, Inc.”, this high-energy show had over 60 performers and acrobats moving and grooving to the music. After its first season, the parade was scaled down to featured a few less floats, some characters being dropped, special effects being toned down, and the number of show stops being brought down from 3 to 2. Even with this, the parade still seemed to be pretty popular. It brought kids into the mix after DCA was often regarded as “too adult”. The parade left in 2008, being sent to “Disney’s Hollywood Studios” and was replaced by the “Pixar Play Parade”. The Pixar Play Parade should be returning right around June 15th after a few years on hiatus due to the lack of a parade route because of construction.

Did I mention one of your favorite parades? Would you like to see them back in the park? Were you as jealous as I was of those drummers hanging off the floats? Let me know in the comments below. As we get one more week closer to the big re-reveal of DCA, I will be returning with an article on the past shows at the Hyperion Theater. Until next time, “Come Away With Me!” Have a Magical Day!